Well at last it's finished. Cue fanfare of trumpets!! 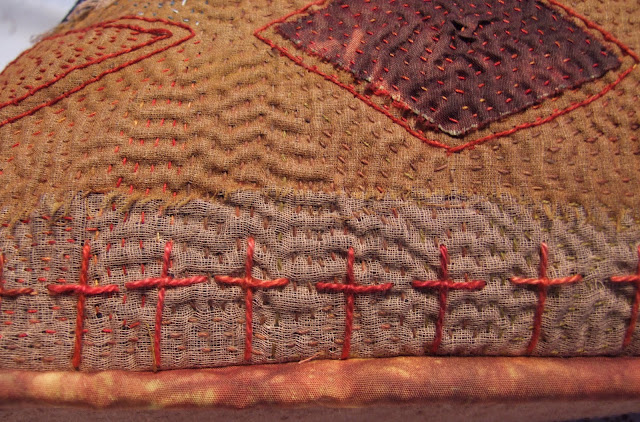 The cushion has a border of crosses and a piped edge. There are large couched Xs and blue triangles too although you can't see them in this picture. 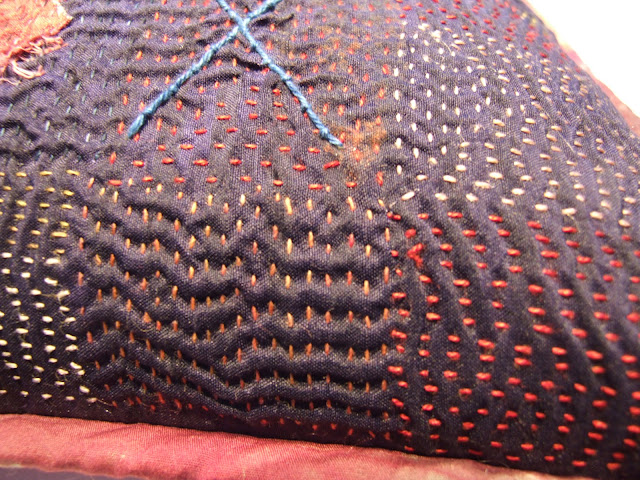 You couldn't call it anything other than a labour of love when the quilting has taken so long! I wouldn't dare count the hours because it might be depressing but I'm very happy with the way the stitching has turned out so it was well worth the effort. It's such a dark November afternoon that I've struggled to take decent photos. I'll try again when the sun shines - then I'll show you the whole thing. 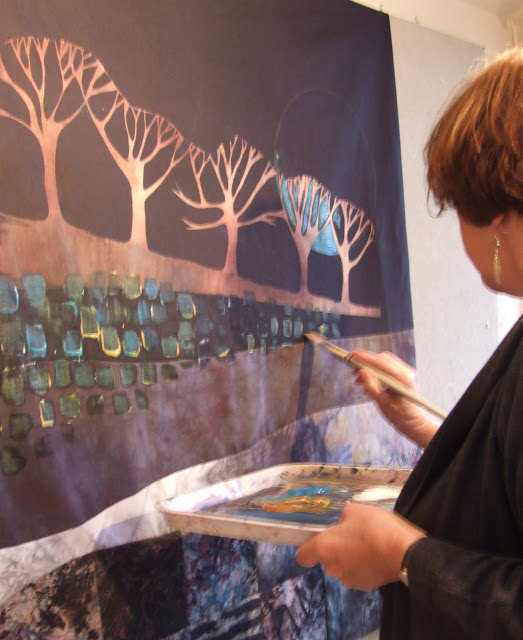 Of course with the cushion finished it's time to move onto other things. The pieced landscape on the wall in my workroom was beckoning, so today I started to add more discharge paste. 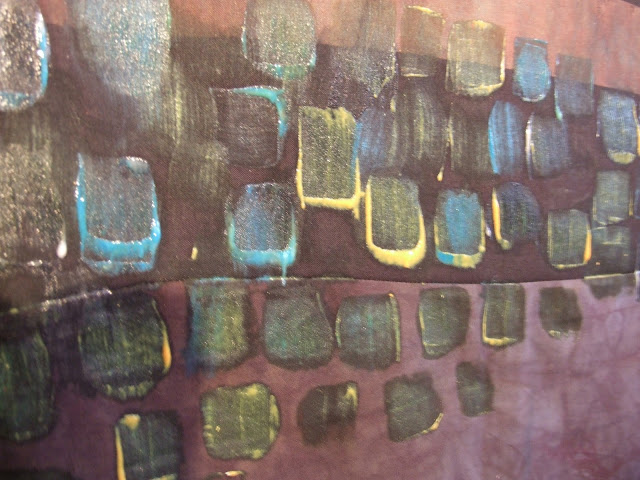 I'm using deColourant plus and deColourant paste to extend the treeline to each side of the quilt and to create some shapes that will give me something to stitch around. The discharged shapes will also help marry the different horizontal bands of fabric. 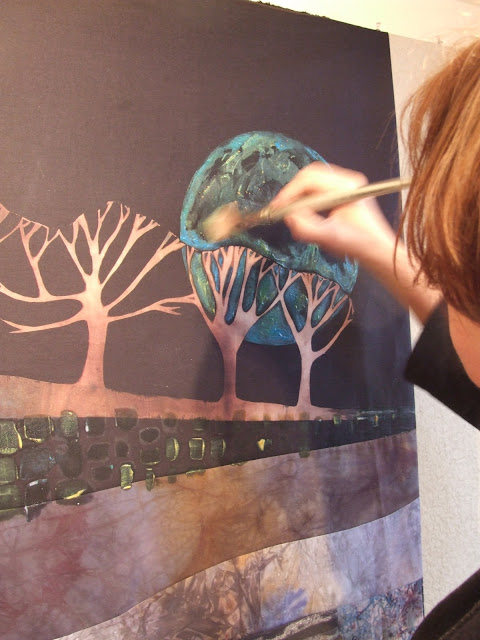 I know it's a bit of a cliche but there has to be a moon as usual - this one is going to be quite colourful but I won't know exactly what it'll look like until the paste is dry and I can iron it. I've applied the paste very crudely so some areas will remain dark and hopefully look crater -like.

I'll show the results in a day or two. Thanks for visiting! Linda
Posted by Linda Kemshall at 16:39 3 comments:

I could do this in my sleep

Actually, if I could stitch while asleep I would make more progress. The simple running stitch I'm using in the Kantha inspired piece is very repetitive, mindless and totally compulsive! I keep telling myself to stop but not till I've reached some particular point - even if it is late at night and I should really be tucked up in bed. 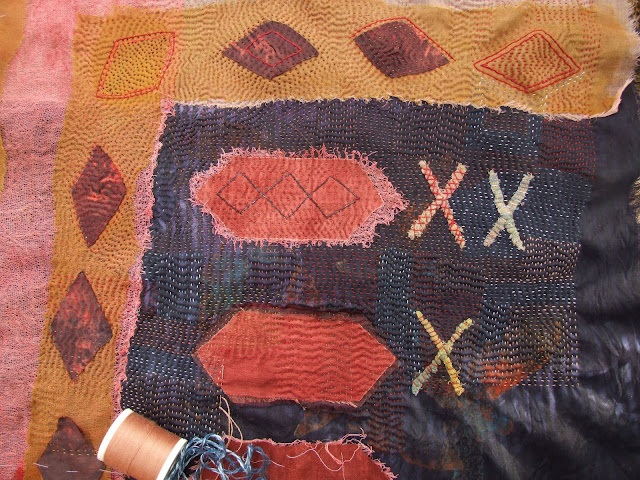 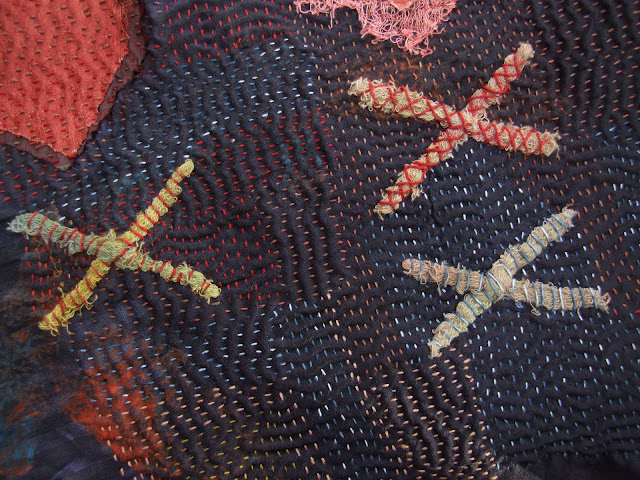 It's feeling so lovely in the hand now there's all this quilting. 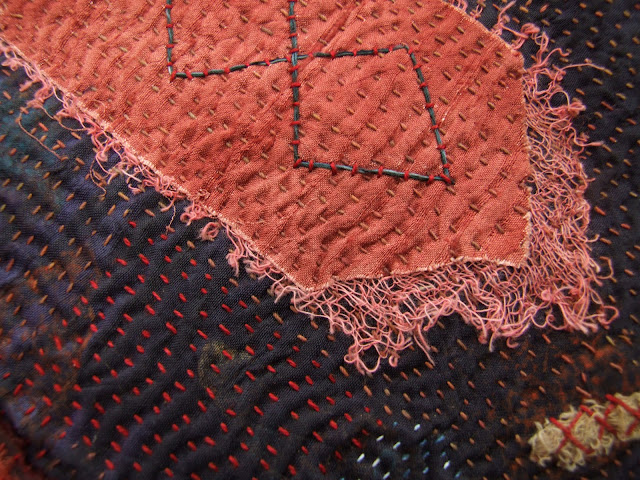 And I love the spark of red and indigo against the dark silk. A few more hours of stitching in daylight hours would be good but my excuse for this project taking so long is this little distraction. 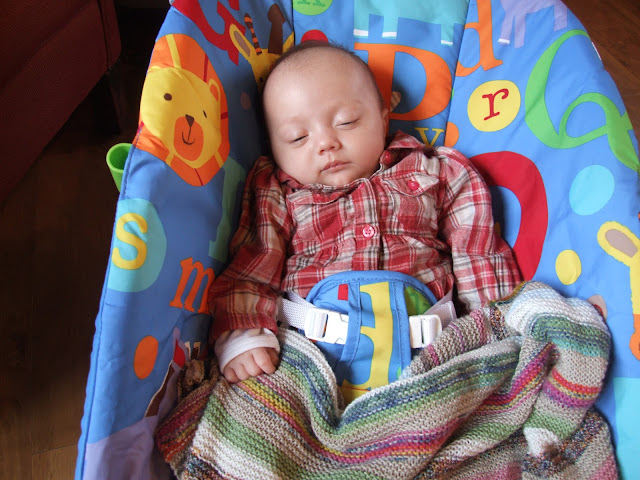 I know it looks like butter wouldn't melt but she doesn't sleep all day! 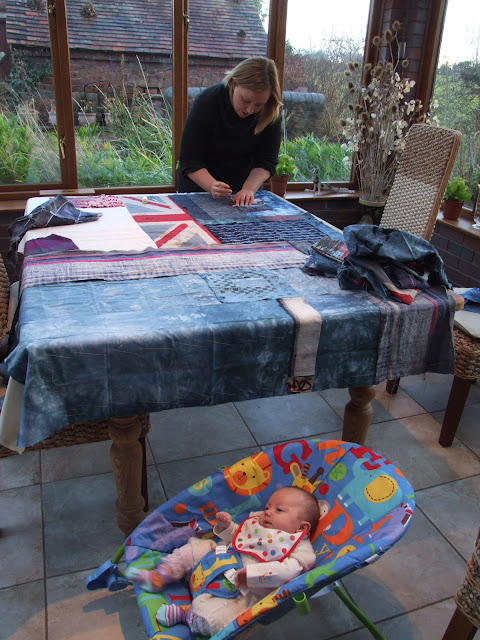 Laura's trying her hardest to get back to her creative work too but there's only so long a baby can have a kickabout in her rocking chair and then grandma has to come to the rescue. Not that I'm complaining you understand - the Kantha can wait!

Talk to you soon - Linda
Posted by Linda Kemshall at 18:52 3 comments:

As long as you're not the sort of person who hankers for the bright lights of a big city, village living has its attractions. 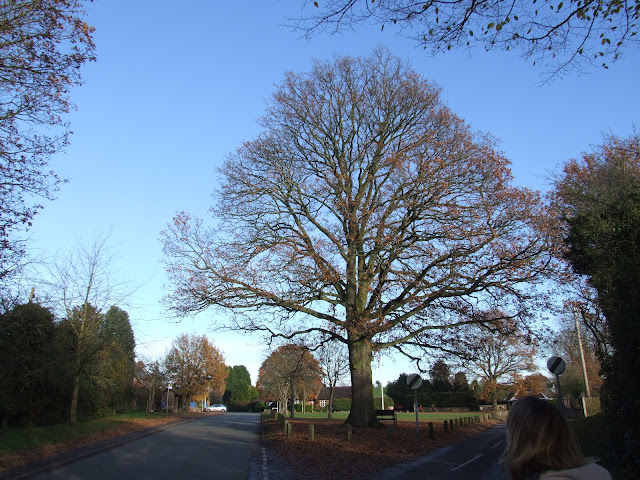 We've got a village green. According to a plaque I noticed for the first time today, the oak tree at one corner was planted in celebration of Prince Charles' birth. 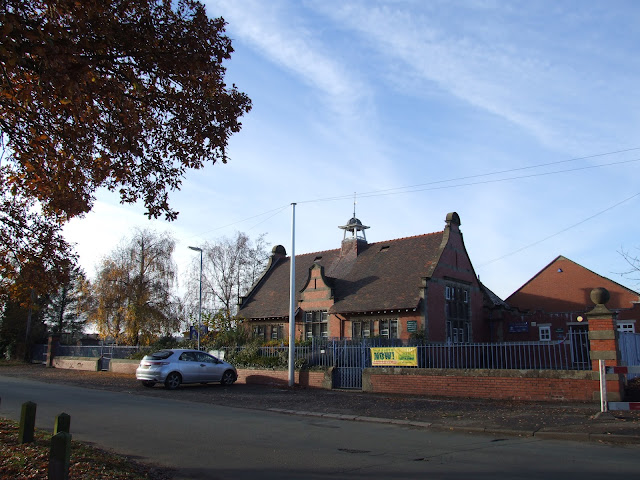 We're lucky to still have a lovely little junior school. 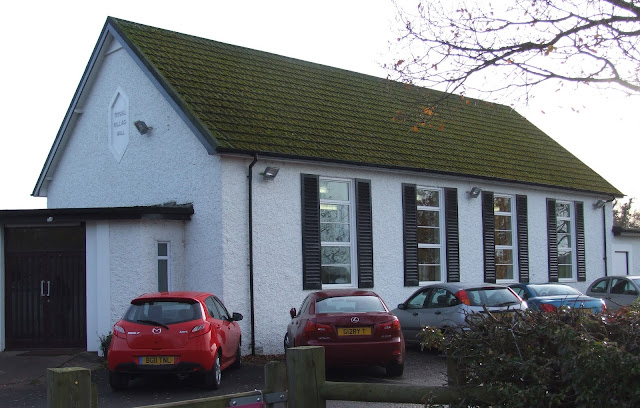 And best of all, we have a village hall. It may not be the prettiest building but it brings the community together as a venue for classes and social events. 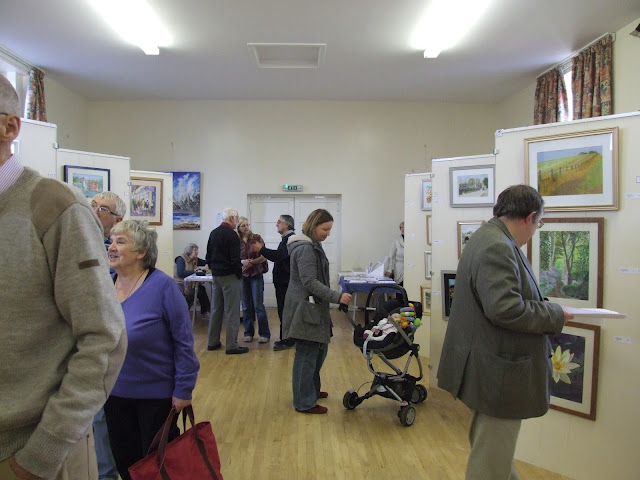 The local art society held their annual exhibition there this week. It gave us the opportunity to introduce Amelie to the world of painting and drawing. She seemed rather underwhelmed by the affair but at 10 weeks old it's still early days and I'm sure we'll bring her round eventually.

Thanks for dropping by - talk to you again soon. Linda
Posted by Linda Kemshall at 17:18 3 comments:

So, how did that happen?

It's been something of a momentous week. It would seem that I am now officially old! It's crept up on me while I wasn't looking but I've qualified for my state pension so it must be true. With the rocking chair and shawl beckoning I have resolved to finish lots of bits that have been hanging around for too long. 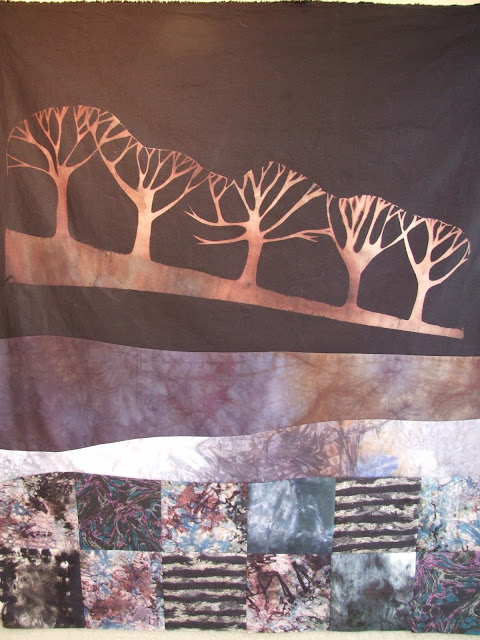 You might have seen these discharged trees before - now I've added on some hand dyed horizontal bands and a patchwork foreground. It's back on the design wall while I decide if I want more patchwork on the bottom. I had intended to include some appliqued crow fabric I made ages ago but I had a change of heart this morning. The crows will have to wait a bit longer for their moment. 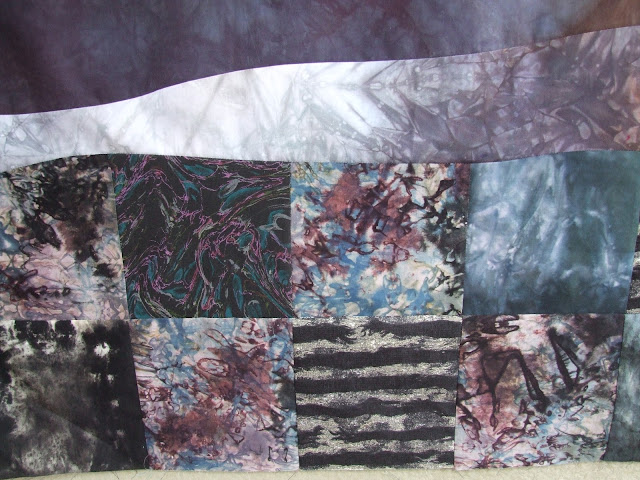 The fabrics are a bit mean and moody to suit this melancholic time of year but I'm intending to add some copper metallic painted details once the quilting is finished - that'll liven them up a bit! 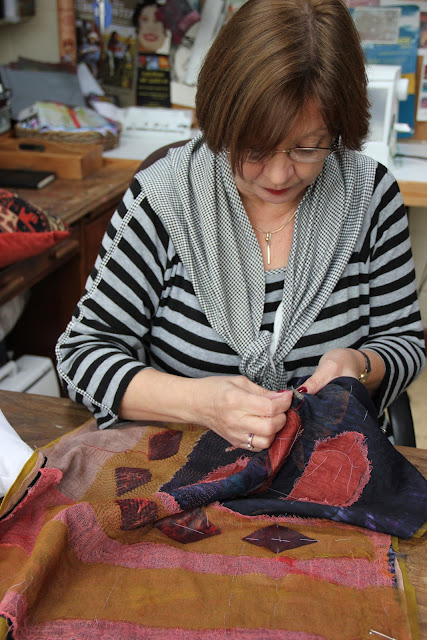 The stitching continues on my Kilim and Kantha inspired cushion. 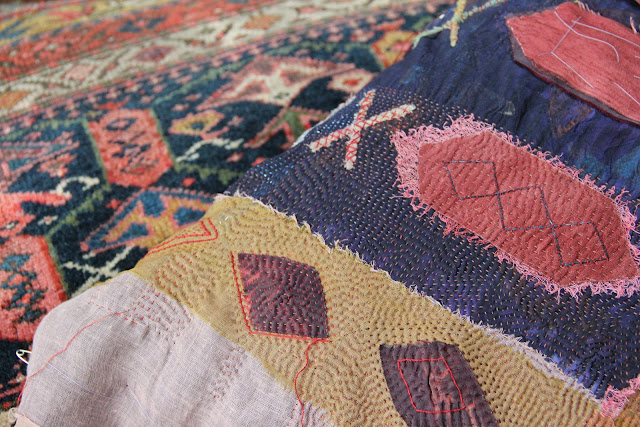 DMTV members can see Part 3 of the project from tomorrow and I've promised to show the finished cushion here when all the quilting is complete. With this amount of hand quilting it may take some time! 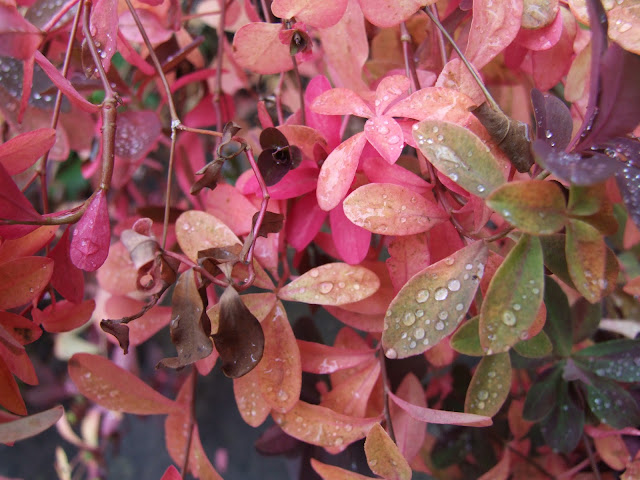 There's still lots of glorious colour in the garden. This euphorbia is just outside my studio door. I love how many colours there are on a single plant and the beads of water are an added bonus. 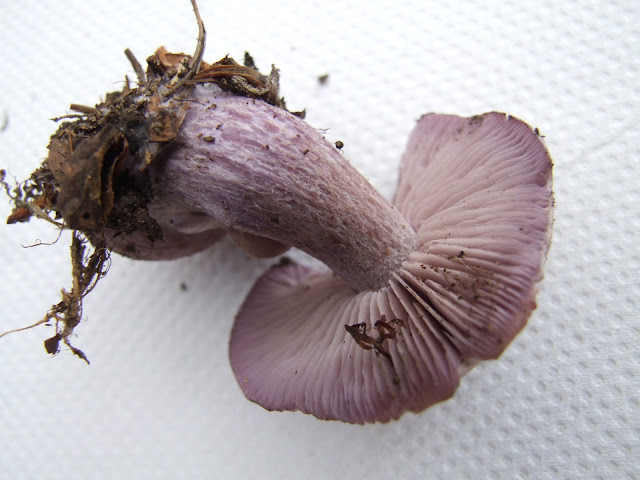 And speaking of colour this purple mushroom appeared in the woodland part of our garden yesterday. Mushrooms are notoriously difficult to identify - I'm hoping it may be an Amethyst Deceiver mostly because I love the name! 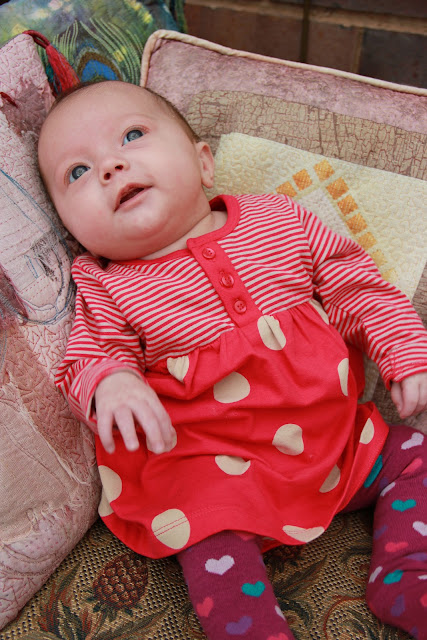 Here's a picture of Amelie taken a few days ago. She's looking pretty colourful too!

Thanks for reading this. I'll be in touch again soon - Linda

I know, I know, you don't have to tell me, it's been ages since I've blogged. I've been laid low with an unpleasant virus which has made it hard to just keep up with the essential daily tasks but luckily I'm better now and will do my best to be in touch more regularly.

I don't want this to turn into a knitting blog but at the end of a long day when you don't have much energy for anything else knitting is a mindless occupation that keeps you productive when you're slumped in front of the TV in the evenings. 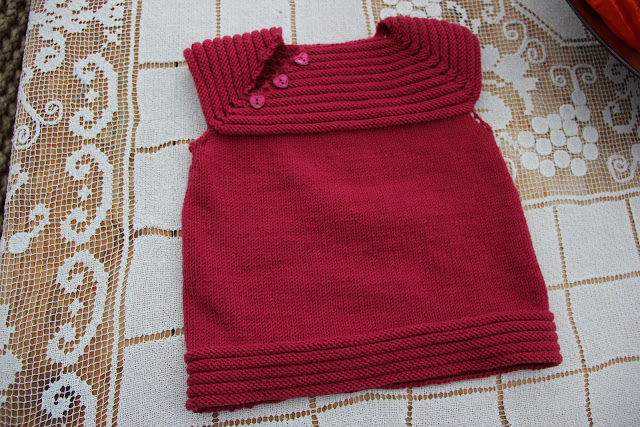 And of course when you have a new grandchild there's plenty of reasons for knitting. This raspberry coloured dress is a pattern designed by Tora Froseth. I found it for free on the web. 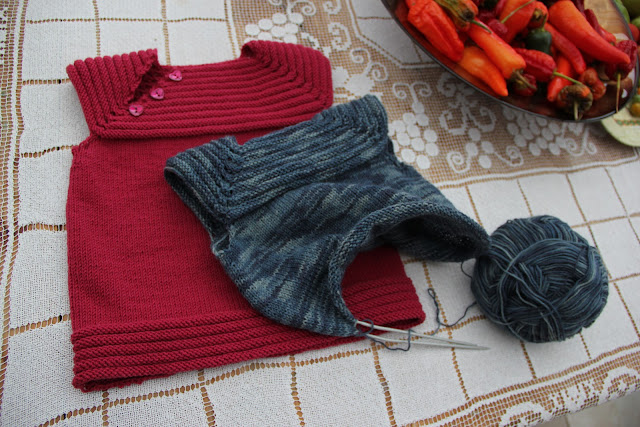 It turned out so well in raspberry that I couldn't resist trying it in a denim blue sock yarn. It's knitted in the round so miraculously there are no seams to join up when it's finished. My knitting is OK but sewing everything up neatly isn't my strong point. This may become my favourite construction technique! 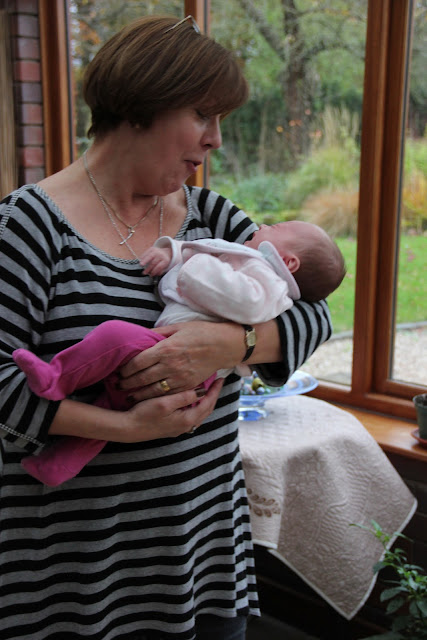 When you see how quickly Amelie is growing you'll understand why I have to knit so fast! 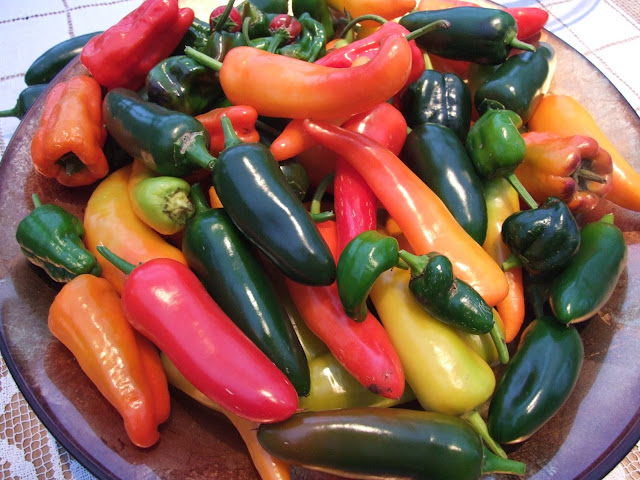 He who gardens presented me with a culinary treasure this week. The weather has turned so cold at night that he had to pick all the chillies before they protested, turned up their toes and threw themselves off the plants. There is a limit to the number of fresh chillies two people can eat so I've spent a couple of hours today preserving them for the freezer. Let me warn you that this should involve gloves!! My fingers were on fire for more than two hours! I won't make that mistake again! 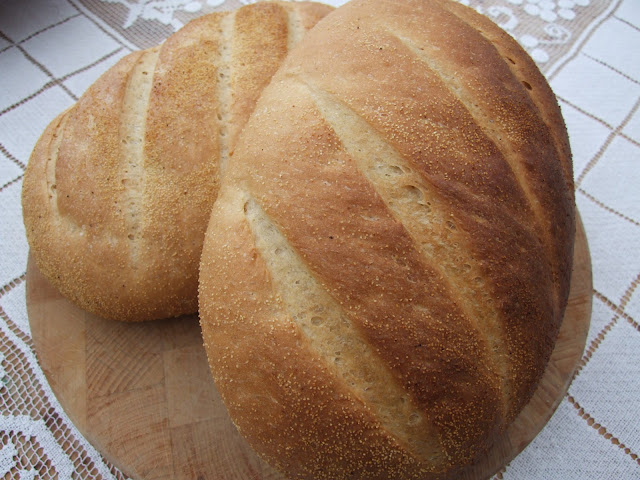 Despite the wintry weather today's bread turned out rather well. There's nothing more satisfying than spending time in a cosy warm kitchen on a dull cloudy day is there? 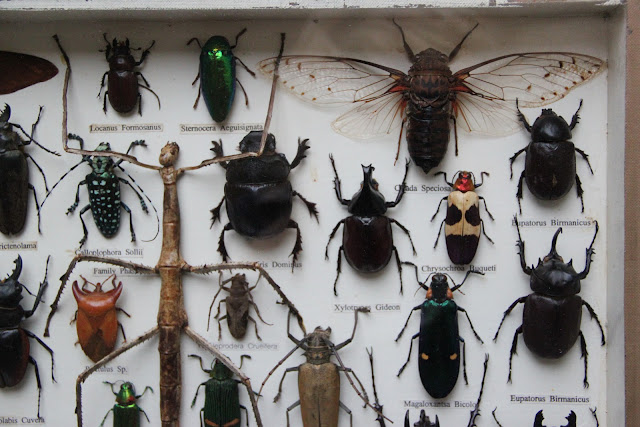 Perhaps it would have been kind to issue a warning before showing this case of rather impressive insects - especially following a picture of innocent loaves! I love the winged creature top right and intend to use him in some work very soon. Apparently he is the world's largest Cicada -  a very good reason for avoiding a trip to Indonesia don't you think? Some of the critters look as though they are made of metallic foil but I would be happy to wear the green irridescent ones just like jewellery!

When I'm not knitting I'm spending every spare moment hand quilting a project for DMTV. It's better than therapy just stitching away for hour after hour. I'll let you see the results when it's finished.

Talk to you soon - Linda