Last time I posted we were getting ready for the show at the NEC. I know we English are weather obsessed but it's supposed to be spring here so why on earth did the weather refuse to co operate? 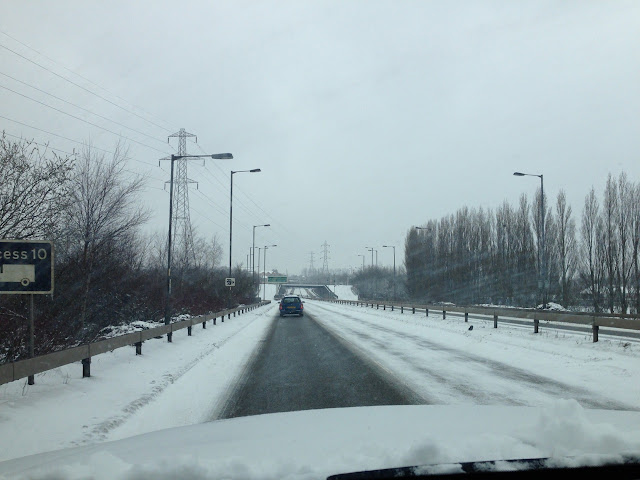 This is no country road - this is the access lane to a major motorway so you can imagine what it was like trying to get out of our little village! 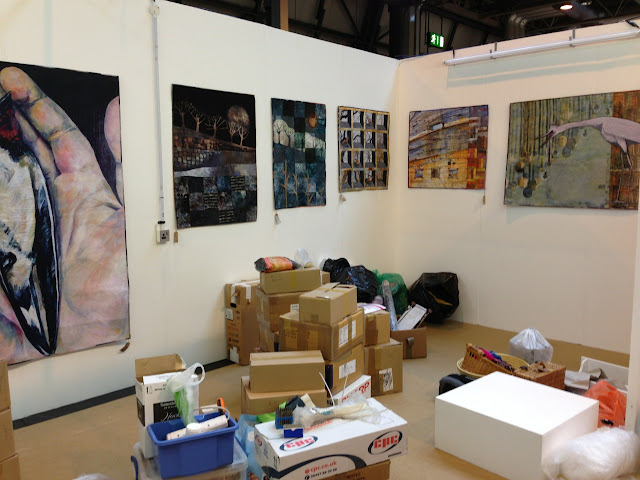 Despite the hairy journey, Laura, Adrian and Jamie did get through to the Exhibition Centre and soon set to work building the stand. At first it looks as though all the stuff will never fit in but a few hours later........ 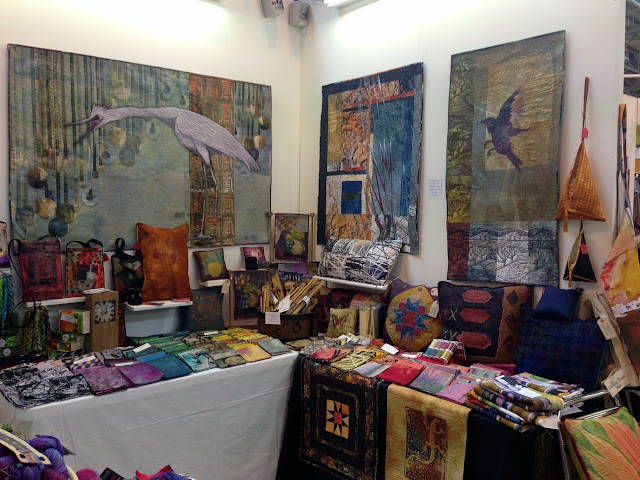 It's all beginning to look quite colourful and tempting. They emailed me pictures throughout the day so I didn't feel left out of things! (I'm usually quite bossy setting up at a show but I didn't have the nerve to interfere and tell them to move things around!). 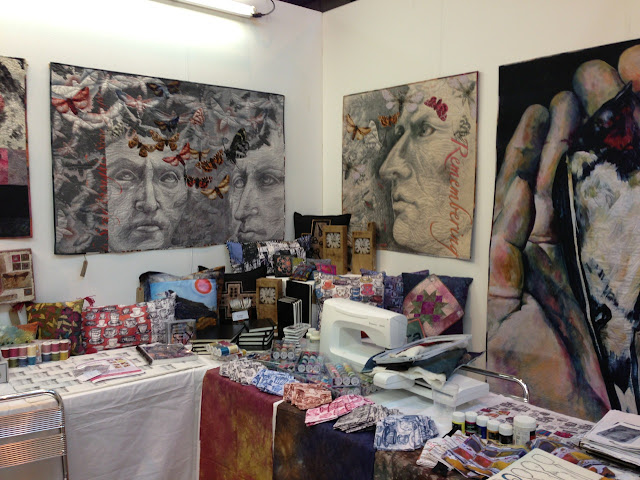 At the other end of the space Laura set up her embroidery machine and an area to demonstrate fabric painting. The three quilts you see displayed here are all digital prints made by Laura and Jamie's bespoke Fingerprint service. They attracted a lot of attention as few people have heard about wide format printing and were curious to know all about it. I had some of my sketchbooks there to show how a small image could magically become a large print and ultimately a quilt. 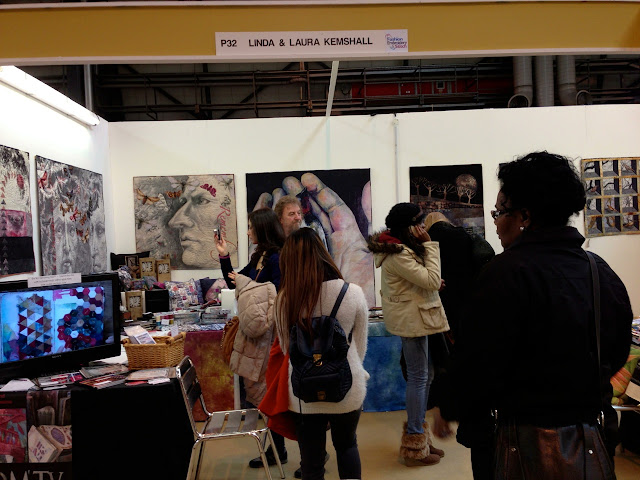 The weather worsened over the four days of the show and we decided it was too risky to take Amelie out in such bad driving conditions again. She'd been a big attraction on the stand on opening day and really enjoyed her introduction to the exciting world of stitch but we couldn't risk getting stuck in a snowdrift with a hungry baby on board so I opted to stay home with her for the rest of the show. I'm sorry if I missed any of you although it seems more people were disappointed at not seeing the baby! 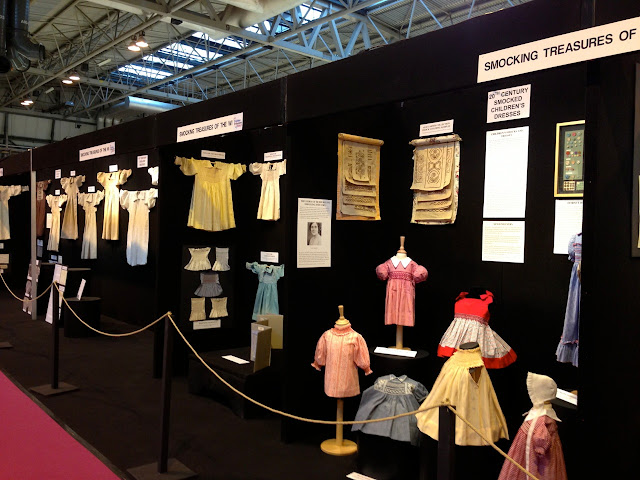 When we're at a show we're busy working and it's hard to escape the stand long enough to see the other exhibitors. Luckily the WI stand was between us and the entrance so even though I was only there one day it couldn't fail to catch my attention. 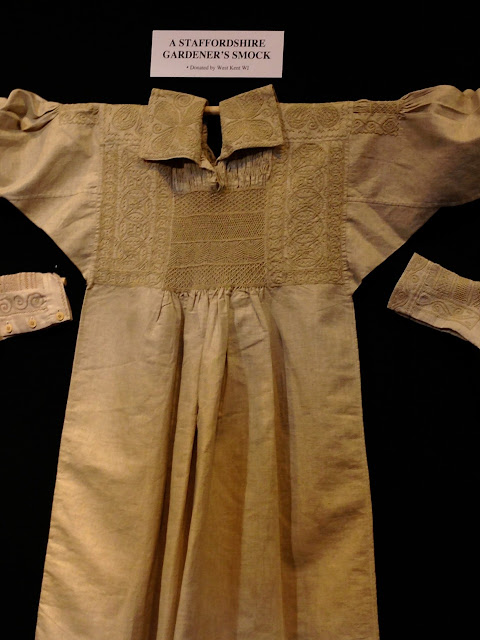 This gem of a collection is housed at Denman College and has never been exhibited in its entirety before. I loved all the smocks but the Gardener's smock was my absolute favourite. Like me it's from Staffordshire! Also like me it doesn't look as though it's done much gardening! Maybe it was kept for best. 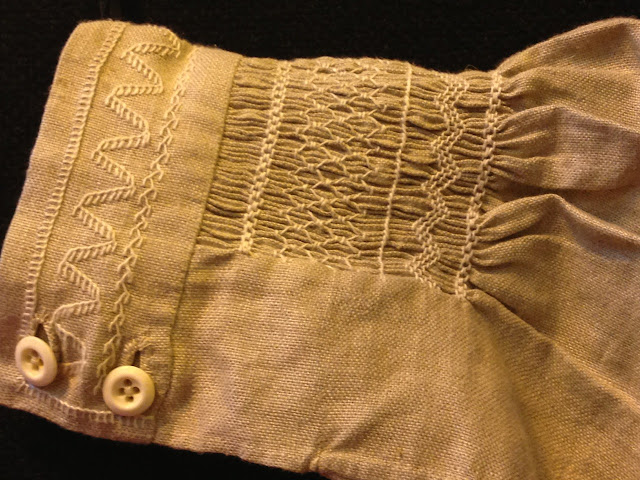 Just look at the detail - isn't it lovely? Apparently there were specific motifs that were embroidered onto each smock to signify the trade of the wearer, for example a forester might have trees and a shepherd a crook. This made them easily identified at a hireling fair. Maybe we'll have to make ourselves a smock decorated with paint tubes and a sewing machine? 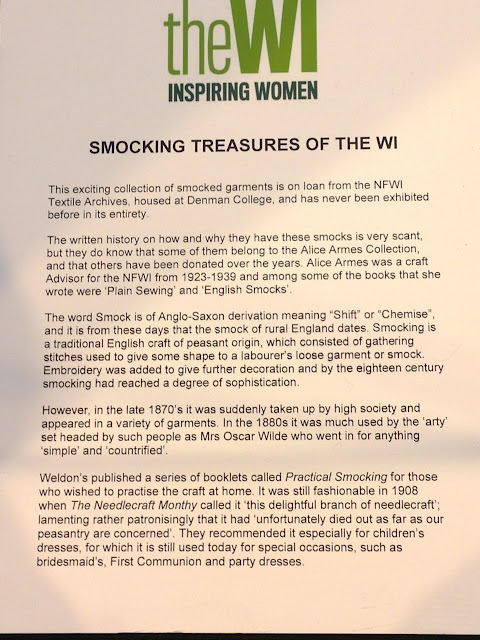 I do feel inspired to have a go but perhaps I'll be realistic and start with a baby sized smock before I take on anything bigger!

This is quite a long post with so many photographs but I could have included loads more! I know a lot of you didn't get to the show because of the snow so I hope this has given you a small taste of what you missed.  When we send out tomorrow's newsletter we'll include some more pictures and there have also been a number posted on our Facebook page over the past few days that you might enjoy.

Fingers crossed Spring is about to appear!!

Thanks for dropping by - I appreciate it, Linda

Tomorrow is set up day for Fashion Embroidery and Stitch at the National Exhibition Centre in Birmingham, UK. It's been frantic here getting everything ready for the stand but as well as the quilts, the sales items and the demonstration bits and bobs it is important not to forget the inner man. With 5 days at the show we shall need to eat - I've been busy tonight baking bread so that everything will be as fresh as possible. 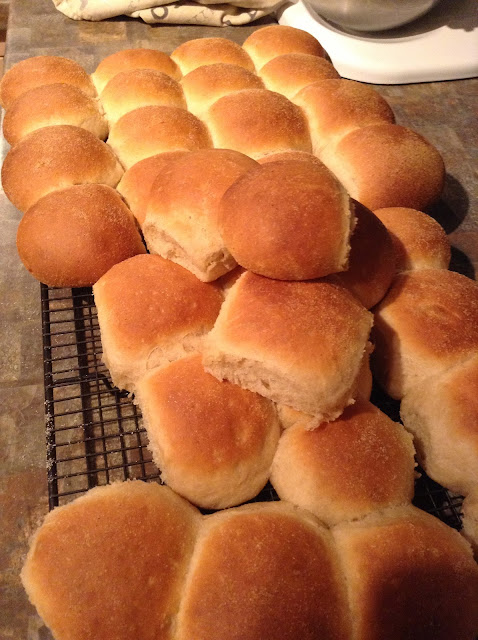 They look pretty appetising don't they? I'm home baby minding tomorrow while the others build the stand - think I've drawn the long straw this time! It'll be a treat to turn up on Thursday and see it all looking gorgeous! We'll be taking lots of pictures and I'll let you see how it looks really soon.

Well, trust my mother to be right! Apparently, in the early fifties when I was a baby it was the done thing to put babies outside in the garden for a daytime nap in their prams. I told her things had changed and nobody did that anymore. She says fresh air helps babies sleep and I was outside come rain or shine, or even snow. I said how ridiculous - she just nodded knowingly in that irritating way that mothers do. 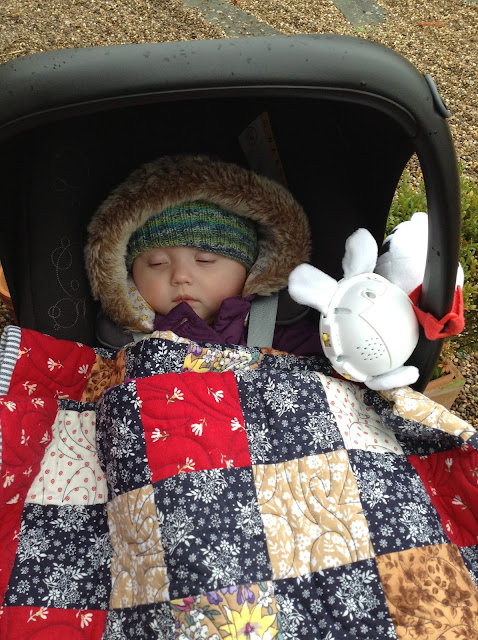 Now before anyone reports me to the NSPCC for neglect, Amelie was wrapped up and cosy under her quilt and didn't seem to mind the gentle drizzle we endured all day today. She was just outside of the window and so I could watch her like a hawk. I had taken her for a walk around the village and it didn't seem fair to wake her when we got back. She sleeps so little in the daytime that any sleep is precious. Perhaps it was the sound of rushing water from the nearby brook or the breeze in the trees that lulled her but even the raucous calls of the local crows and rooks didn't wake her for almost 2 hours. May have to try this again tomorrow although next time I might try and do something useful and not just sit waiting for her to wake up! 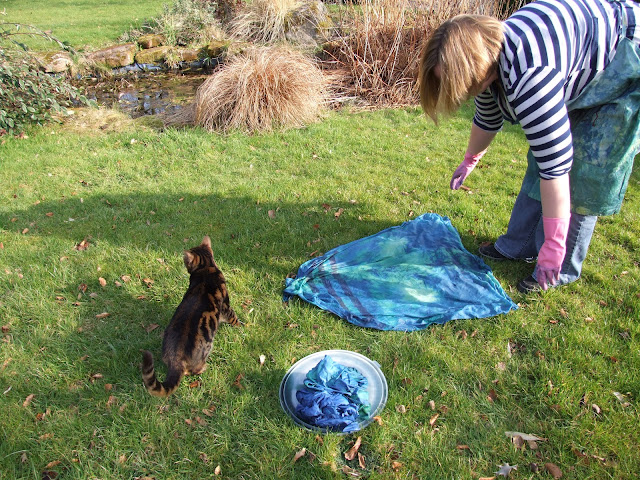 A couple of days ago the weather was much kinder and we took advantage of the sunshine to have an indigo vat in the garden. Toby, curious as ever, was quite fascinated to see Laura covering the lawn with wet fabric which soon turned blue in the bright sunlight. 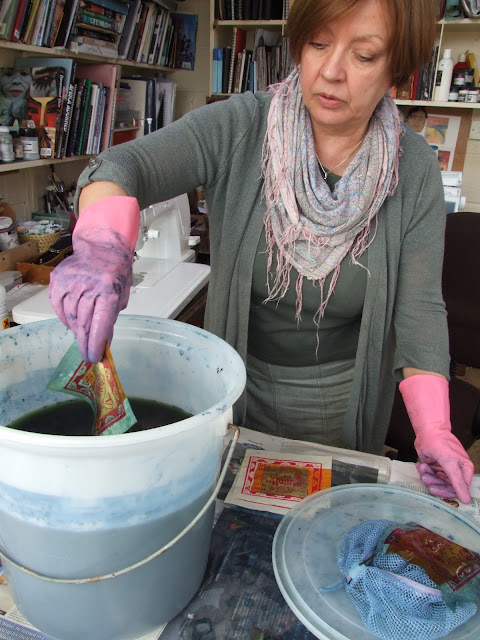 The indigo will remain active for a while yet so back in the studio I experimented with a selection of papers including these foiled fortune cookie wrappers. 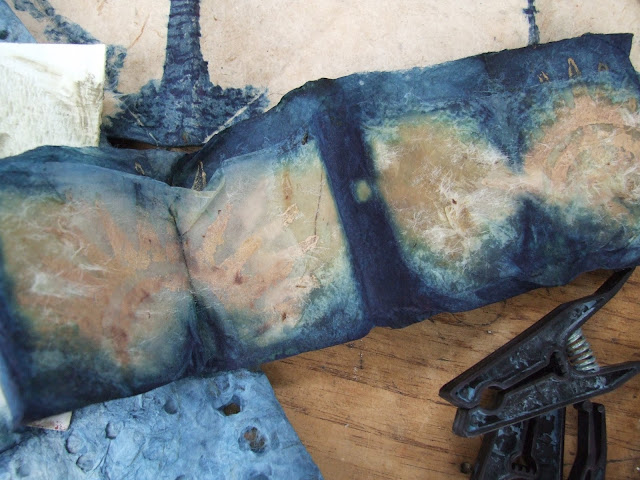 This handmade Asian paper is still very wet but I prised the folds open just enough to see it is showing promise and is much improved on its original state. 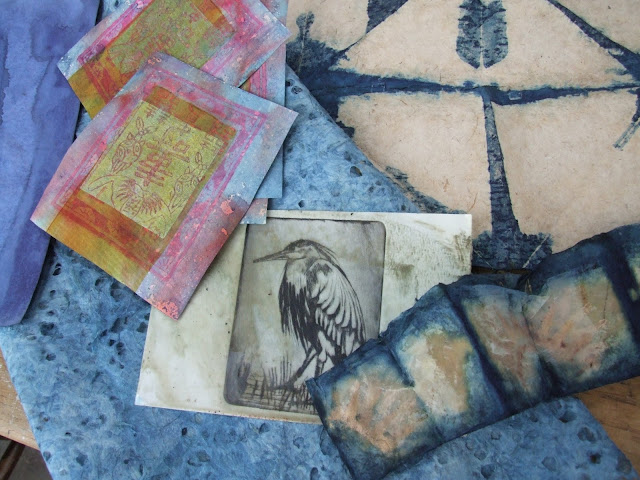 I'm gathering quite a pile of blue papers to combine with some of the fabrics we dyed. The trouble with an indigo vat is knowing when to stop. It soon becomes a case of searching frantically for anything else to dunk! While I was rifling through my desk for suitable candidates I came across a heron intaglio print I made last year. I couldn't actually dye him because he's been waxed but as he's a blue heron, he must surely have a part to play with all the indigo in a new piece of work! Watch this space for more mixed media!

As the Fashion, Embroidery and Stitch Show at the NEC approaches alarmingly quickly it's time to focus the mind on what we'll have on our stand. 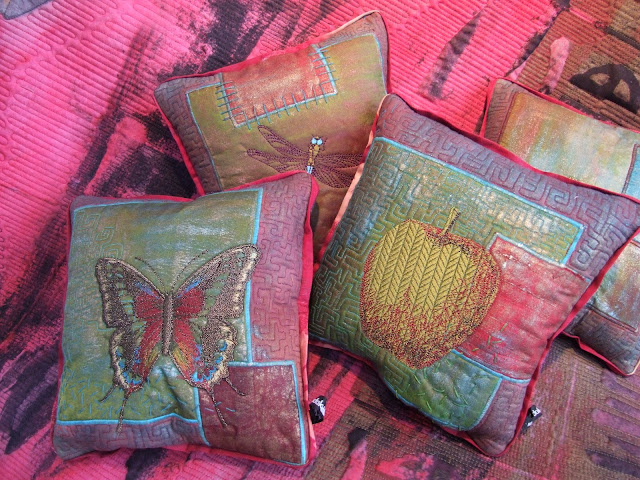 I've been putting the finishing touches to a few more mini cushions today. They are about 8inches square with a little folded insert at the edges. 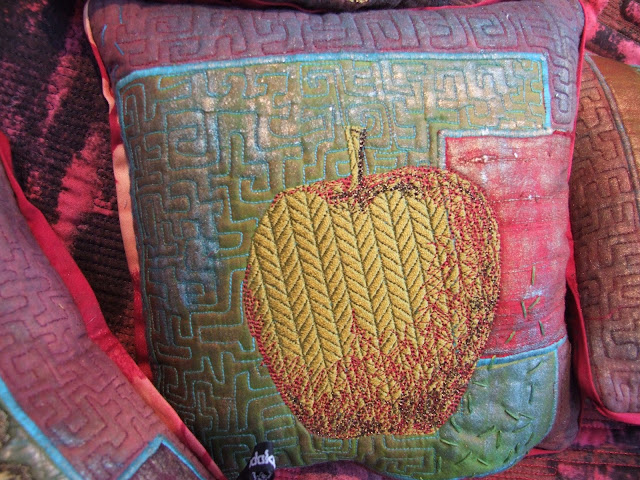 Maybe I should call them my Cannibal Collection as they have all been made by chopping up old quilts. Old though only in the sense that they were made a while ago and have served their purpose (which was to feature in an exhibition). Since then they've been hidden away wondering if they'd ever see the light of day again. This original quilt of hand dyed fabrics with applique, free motion quilting, hand embroidery, metallic pastel and beading has now been digitally embroidered with new motifs. Whew - that's a lot of techniques!

I had so much fun with these I had to search for another likely old quilt that I could cannibalise to make this cushion. I could drown in quilts if I wanted to - there are so many so it doesn't take long to find a candidate. The butterfly embroidery is a Husqvarna design worked in Madeira rayon and my favourite Madeira soft metallic machine threads. 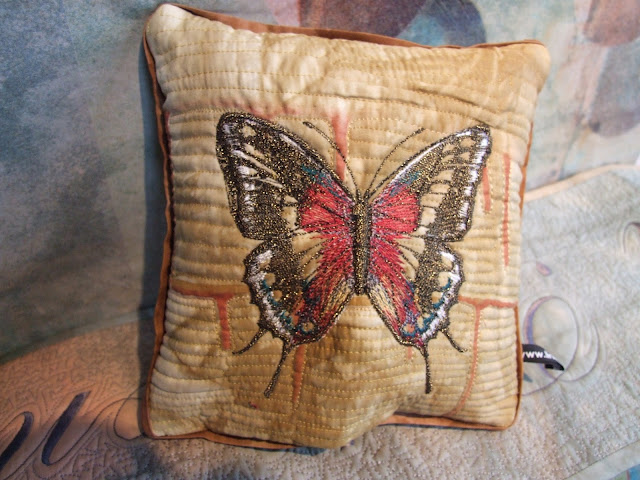 There's only simple quilting with a bit of fabric painting on this one before the butterfly is added. 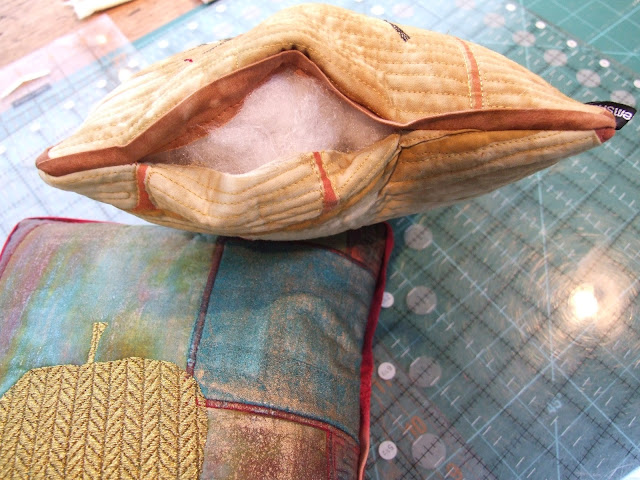 The mini cushions will all have a better shape when the gaps are closed now the stuffing is in place. It's my least favourite part of the making but obviously essential. 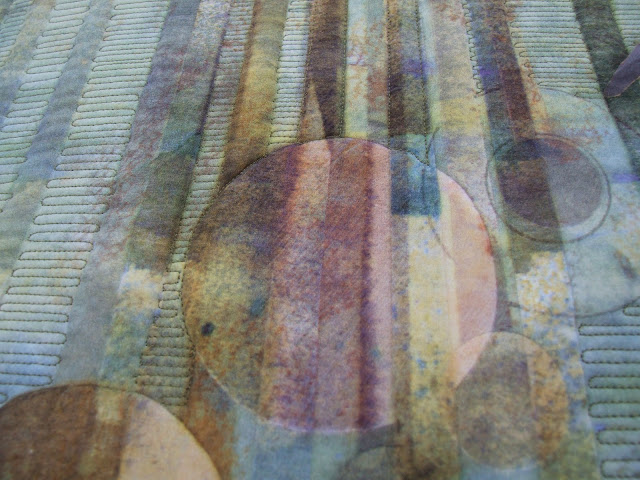 With more serious work in mind I've also spent hours and hours on the mad heron quilt ( no proper name for this work yet but I'm sure something will suggest itself soon).This is just a tiny detail but I think you can see how the digital print has captured the quality of the painted collage from my sketchbook. The collage papers were sprayed with paint to achieve that delicate mottled colour. The whole heron quilt top and its sister piece is on our SiX and Friends blog if you'd like to see quite how demented the heron really is! You'll need to scroll down past Laura's Origami hands and Annabel's portrait of Steph in Still Life with Orange to find them but if you haven't seen either of those pieces you're in for a treat!

Hope you're enjoying a pleasant weekend - bye for now!
Linda