And here's the next one!

The sun is out, the sky is blue and I've had a lovely few hours in my workroom this afternoon. 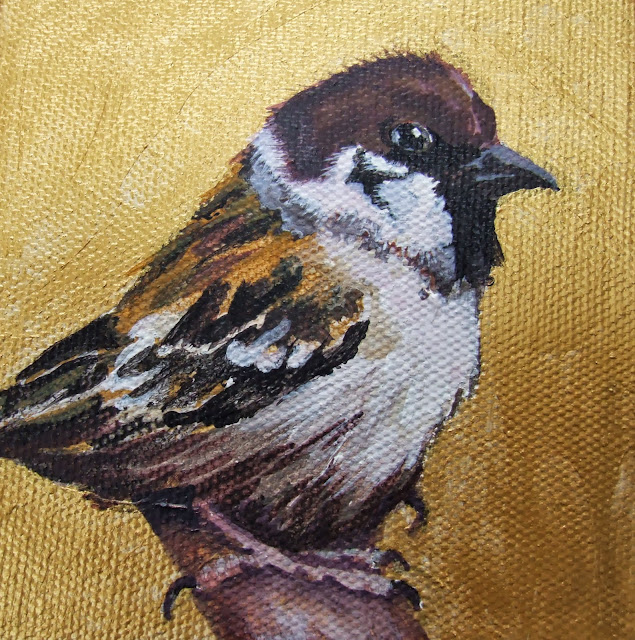 Painting this sparrow for the PenPal painting challenge recently gave me the bird painting bug! 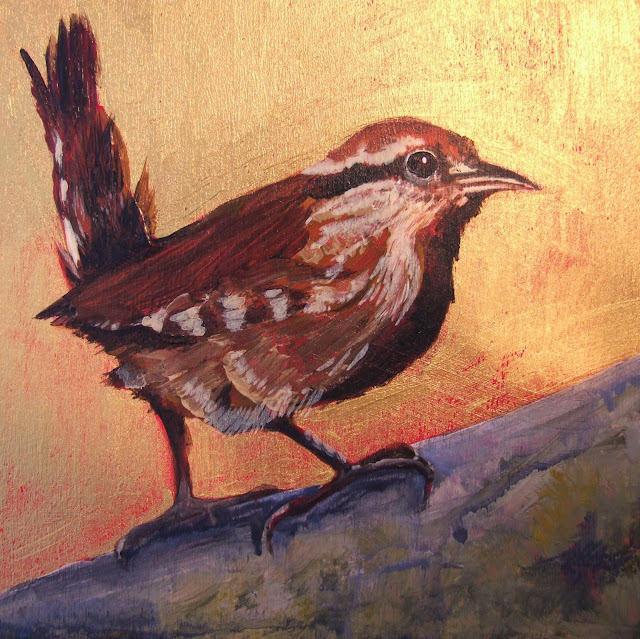 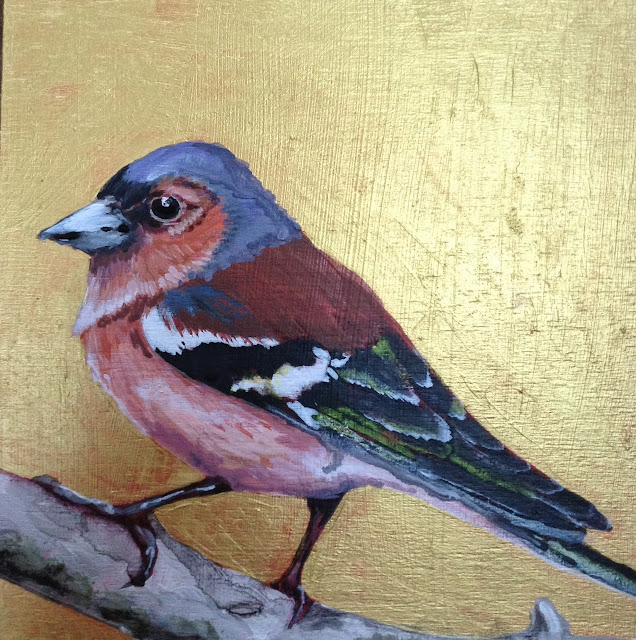 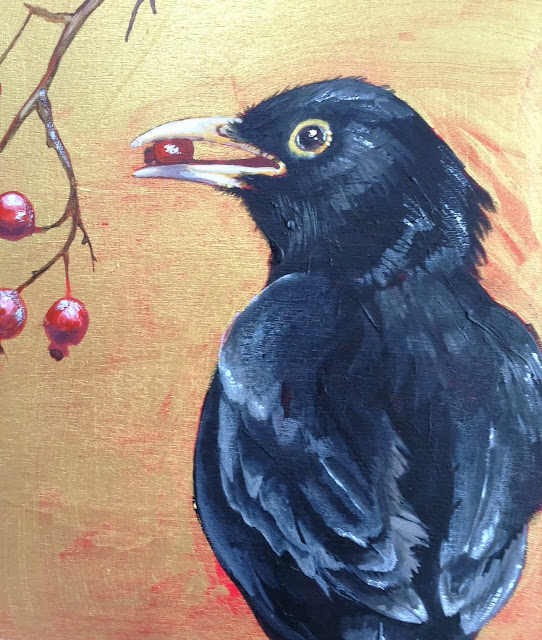 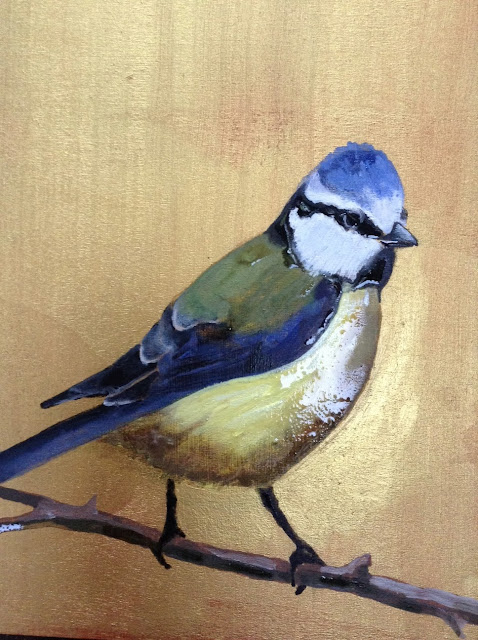 And I'm well on the way with this blue tit who just needs his final details to be added. Sorry about the reflection - as you can probably see, the paint is still wet on this one! 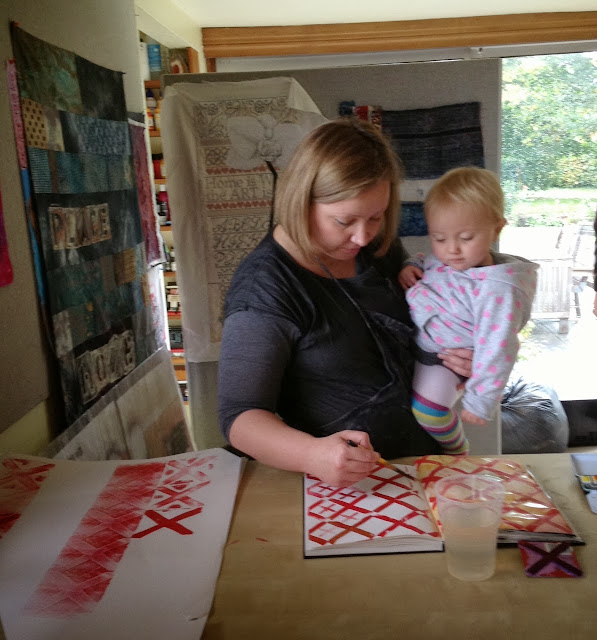 At least I can work with both hands - unlike Laura who has certain impediments to painting these days. Nothing stops her though, even when Amelie has to be in on the act!!

Thanks for dropping by again. Talk to you soon, Linda
Posted by Linda Kemshall at 18:08 5 comments: 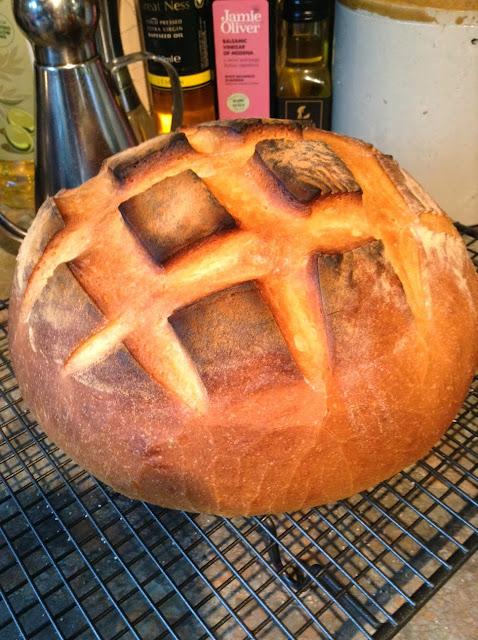 I think I may have a new obsession! Not content with my regular everyday bread recipe I'm experimenting with as many different ones as I can find. You know how you start to get blase and don't actually follow the recipe as carefully you used to? Little discrepancies creep in and the results can be variable. This loaf turned out rather well and was voted the best of the week. Sad to say I used a recipe from a TV chef I can't stand. I won't mention any names but you may recognise who I mean when I tell you he loves himself and his twinkly blue eyes too much for my liking and he's very fond of hair gel! That aside I shall be repeating this recipe again in today's breadmaking session. 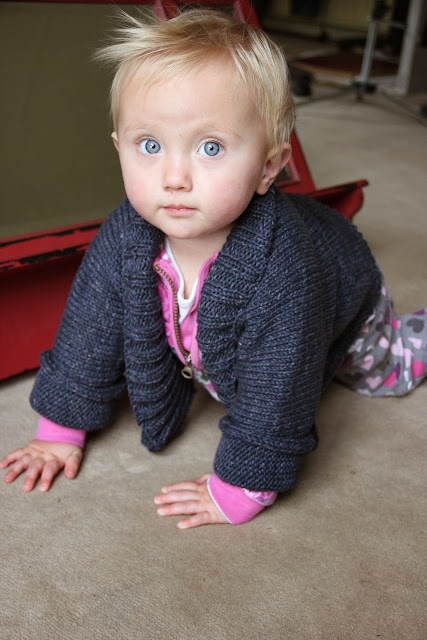 It's been a week of tying up loose ends. I finished the jacket for Amelie and as you can see it was a hit with her. It's turned out a bit bigger than I expected - a danger of not making a tension square beforehand! Do as I say not what I do dear readers! Never mind, it should keep her warm all winter until she grows into those long sleeves. 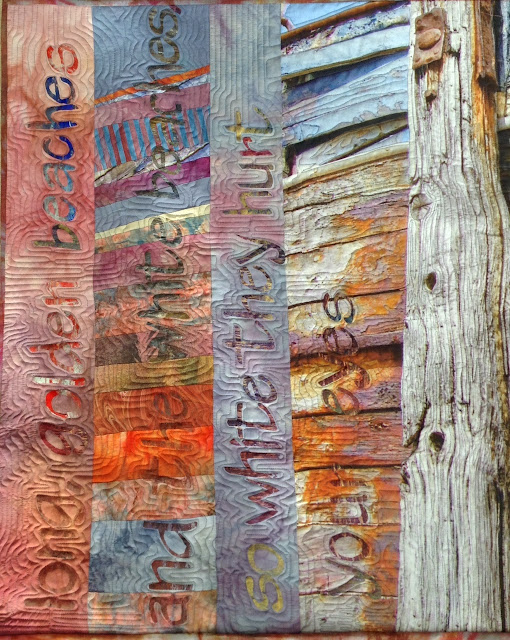 I also finished the machine quilting and attached the binding and sleeve to this piece which has been hanging around for far too long. Now it's ready for some hand stitching to slightly fragment the text and provide a bit more texture to the surface of the quilt. The picture shows just a section but I'll let you see the whole thing when it's done. 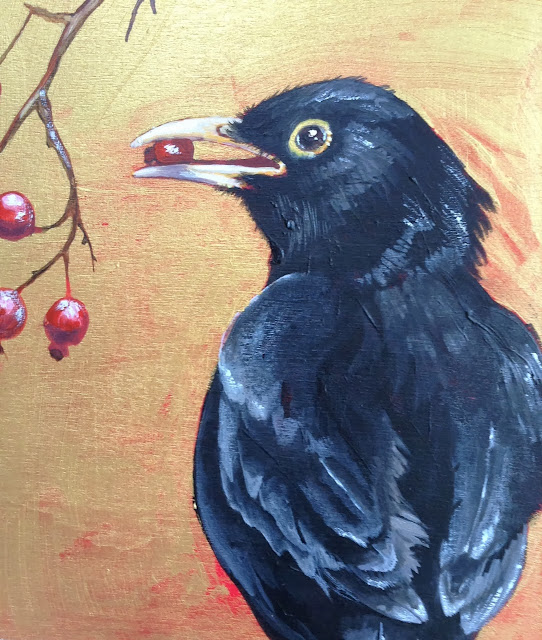 This week members of DMTV will have seen how I made this blackbird painting with acrylic paint onto a wooden panel. It's the latest addition to my new project - I'm well on the way to recording all the different birds I see in my garden. 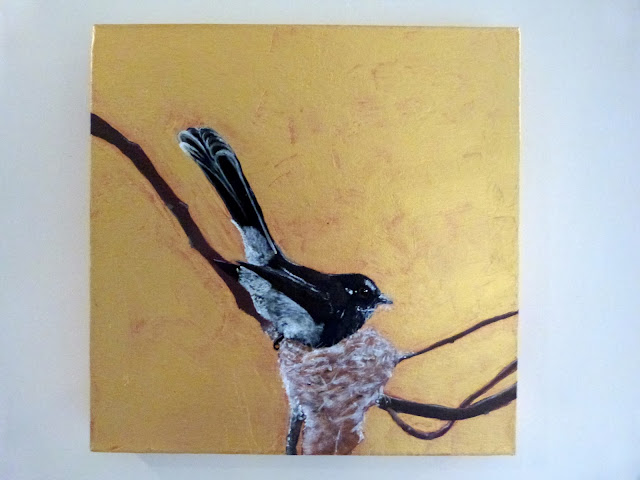 Imagine how thrilled I was to to see how DMTV member Sally in Tasmania used the same medium and techniques to produce her own beautiful bird panel. Well done Sally - I love it!

I'll write again soon - thanks for dropping by - Linda

Another good reason why I'll never be thin!

The apple crop is plentiful but the fruit are small this year. 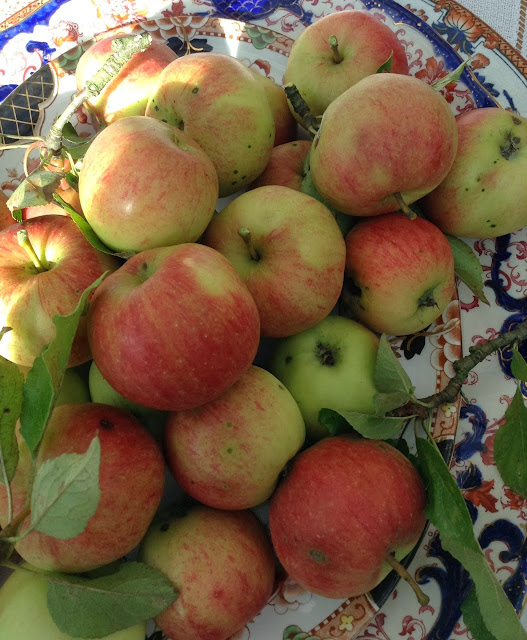 There are so many lying on the ground it's an ankle breaking trip hazard going to feed the chickens. I hate waste and so I feel guilty every time I see them even though I know the birds will love them as it gets colder. The windfalls attract fieldfares and redwings amongst others - I don't suppose we'd ever see these birds if it weren't for the fallen fruit. Note to self! I hadn't thought to add fieldfares and redwings  to my list of garden birds I plan to paint. I completely forgot about them because they are shy visitors who only appear for a short time. This list is getting longer and longer . What about the cuckoos and the herons? Oh dear - looks as though I'll have to buy more panels! 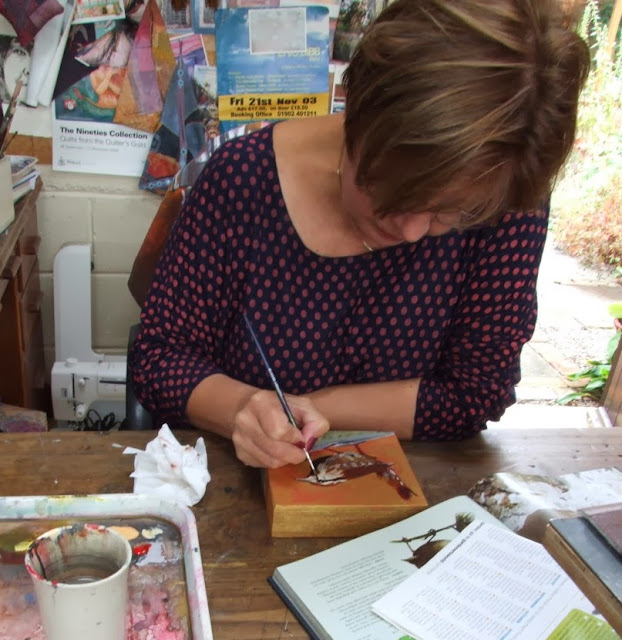 The little wren fits nicely on a six inch wooden panel but I'm using larger ones for the bigger birds.

Unable to ignore the guilt any longer I did pick a few eaters from the tree nearest the house - the one that makes me most guilty as it's the one I pass most often. 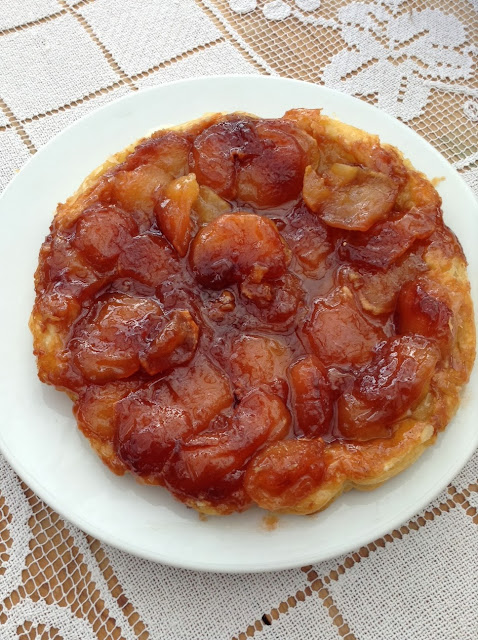 A little while later and we have Tarte Tatin for pudding! Wonder why caramelised apples always taste so much better than just apples? I don't suppose we can justify these as one of our five a day can we? Just to pile on the calories - it goes without saying there has to be creme fraiche! 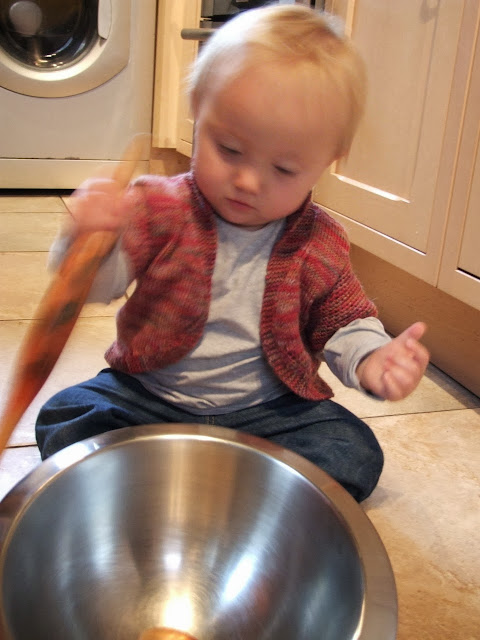 The cooler weather and darker evenings have made me start knitting again. Here's Amelie in my latest effort. If only she would sit still long enough for you to see it! Sorry about the blur - that's my favourite chapatti roller she's brandishing wildly. Who needs a drum kit when you have a mixing bowl and a rolling pin? 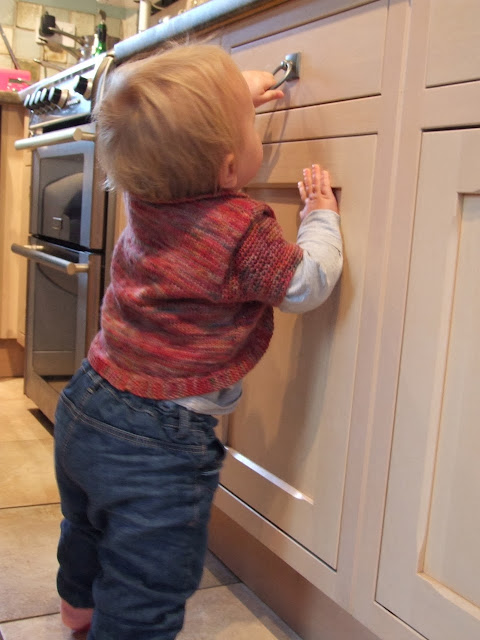 I've made this bolero with the lovely curved back several times before but this time I've crocheted short sleeves for a change. It's lovely to make baby things because they are finished before you have time to get bored. This was one of Laura's hand dyed merino and cashmere yarns and a joy to work with. 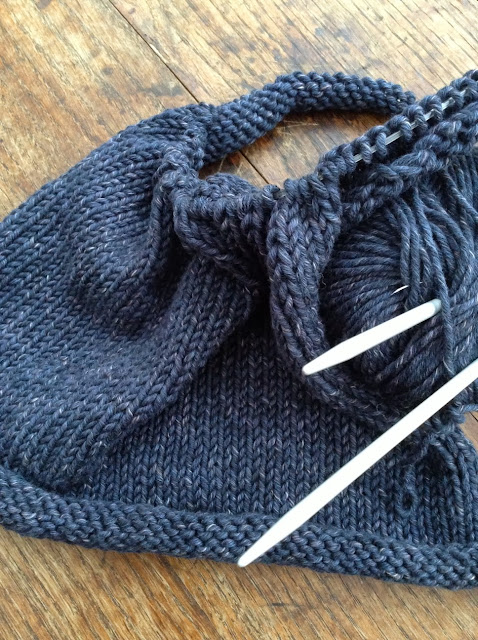 Once I get into knitting mode I can't stop - I've already made a start on the next project. It's a lovely cardigan in indigo blue tweed yarn. This is aran weight so will grow very quickly. The weekend weather is looking a bit dodgy so there may well be plenty of time to get it finished!

Thanks for dropping by - talk again soon, Linda

A busy week or two

My younger daughter has been nagging me for not blogging enough. She tells me it's the only way she can keep tabs on where I am and what I'm doing! I've had a good excuse for being so hopeless lately though. Laura has moved to a new house and is in the middle of relocating her Fingerprint business too. With such a major upheaval it's meant that we've been called on for extra baby minding - not that we're complaining, we love having Amelie and it's been an excellent excuse for a few days out in the Autumn sunshine. 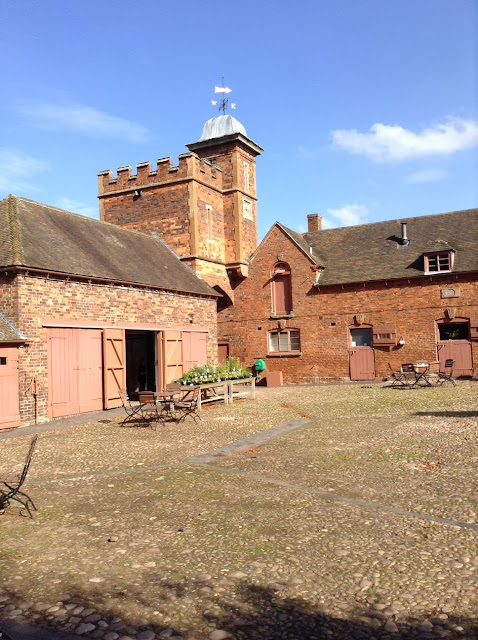 First we went to Dudmaston Hall, a local National Trust property. I can't believe this is on our doorstep but we've never been before. I always enjoy the kitchens, dairies and stables better than the grand houses. That probably says more about me than the houses themselves. If it were Downton I'd no doubt be downstairs rather than upstairs! The buildings in the picture above now house the tearoom and the inevitable gift shop. We only went with the intention of walking the grounds but we were in for a treat; they were celebrating the apple harvest and there were tastings from the cider press as well as all kinds of apple products on sale. Best of all, the Morris Men were out in force. 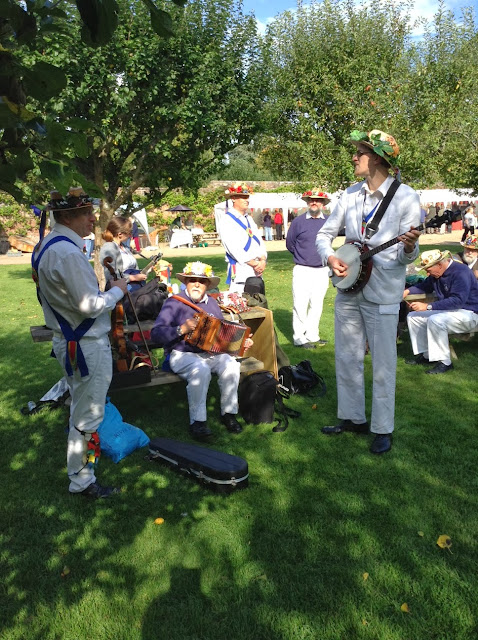 Both of my girls would have hated it. They have always been embarrassed by my jigging about whenever I hear the music. Find me a pair of clogs, a few ribbons and a flowery hat and I'd have been in there! On such a sunny day it set a jolly mood. 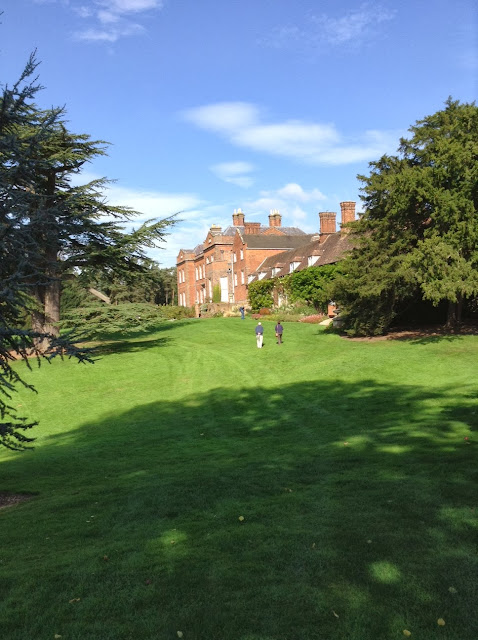 We took advantage of the fine weather and walked across the lawns and around the lake. The intention was to lull Amelie to sleep but of course there were far too many distractions and she could not be persuaded. 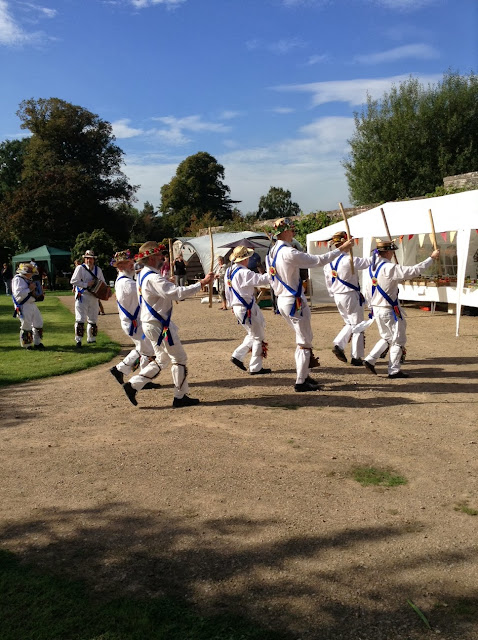 Late into the afternoon the Morris Men were still going strong. It takes stamina to keep all that stick banging going! 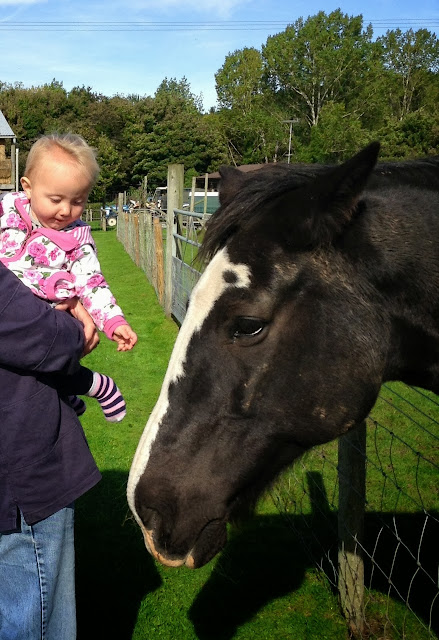 A couple of days later we visited a local farm which now opens to the public. The animals are used to being petted by complete strangers and don't seem to mind but I can't believe Amelie isn't fazed by such a big horse. It was all we could do to keep her from climbing on his back. 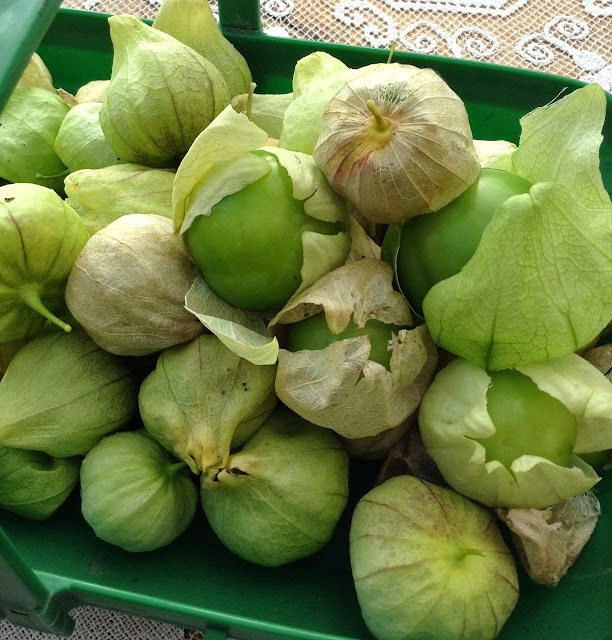 Back home I have my own harvest to celebrate. We have an ancient orchard full of fruit but the tomatillos have also been great this year. This batch are ready for grilling. 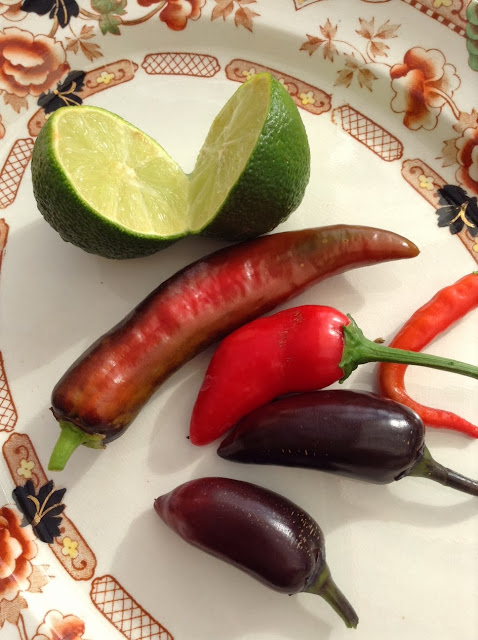 Before they are whizzed up in the blender with homegrown chillies, seasoning and lime juice to make a sauce for chicken or pork. I have enough in the freezer to last all winter.

I wouldn't want you to think I'm spending all my time out and about enjoying myself or stuck at home in the kitchen! I am making time to be creative as well - life is about balance and I'd probably go mad if I didn't! The little mixed media pockets above are the beginnings of some new work I've had in mind for ages. I'm still working this idea through so I won't go into detail now. No doubt I'll come back to it when I've figured it all out and there's more to say. 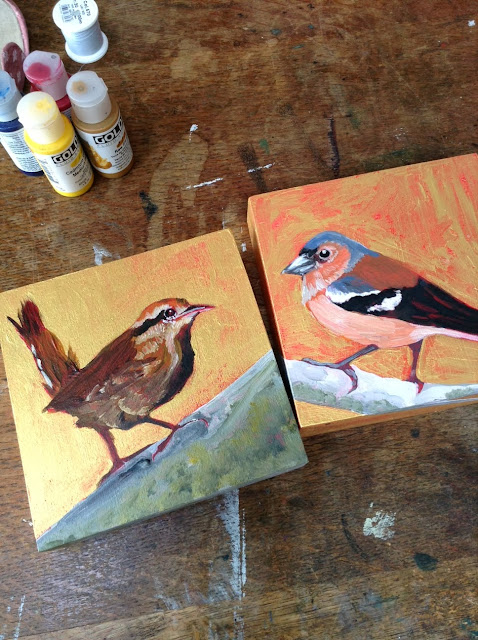 While my brain cells are otherwise occupied the number of bird panels is growing. These don't need much thinking about other than to decide which to paint first. I've opted for a wren and a chaffinch here as both are regulars in our garden.The panels had their undercoat of red acrylic and were then topped with a layer of gold metallic, Now they are getting their first washes of colour to block in the shapes and colours of the feathers. Once the paint is dry I'll begin to add the finer detail. I've had so many people write to ask about this project that we've decided to make a video for DMTV. If you're a member you'll be able to see the complete process very soon.

Thanks for dropping by. It's always a pleasure to know you bothered and yes dear daughter - I won't leave it as long again! Linda x
Posted by Linda Kemshall at 15:28 6 comments: