We started the week as we hope to go on - with cake! Not just any old cake you understand. This was a birthday celebration cake for my mom who's reached the age of 86. Despite all that fruit and a fat free sponge, I doubt that this counts as one of your five a day! 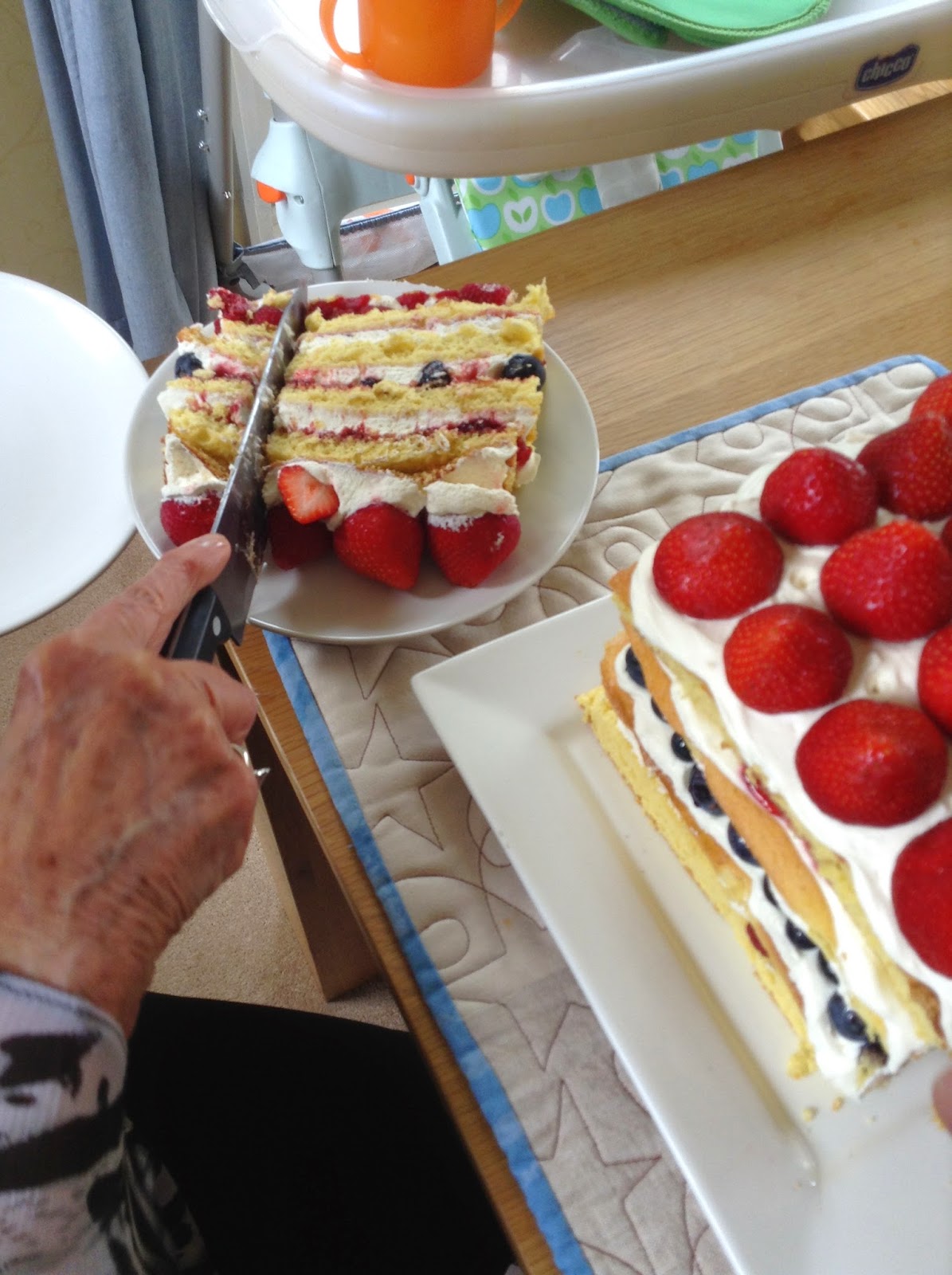 It was just a Swiss roll recipe for the sponge, layered with sweetened double cream, raspberries, blueberries and topped with strawberries. Delicious taste of summer! We enjoyed a lovely barbecue curtesy of Jamie and Laura even though the weather wasn't glorious. There was also trampolining which was probably unwise after all the food we managed to eat. Luckily I have no photographic evidence so you'll just have to take my word for it that I was very athletic! I could barely move the next morning! When I emailed my younger daughter to tell her about the day, spellcheck changed trampolining to trampling - not at all the same thing and certainly not suitable for great grandma's party!

It's not all jollies - after the party the work must go on. The second batch of pincushions are complete and ready to be packed away for our stand at Festival of Quilts in August. I'm really enjoying the digital embroidery on my Husqvarna machine! 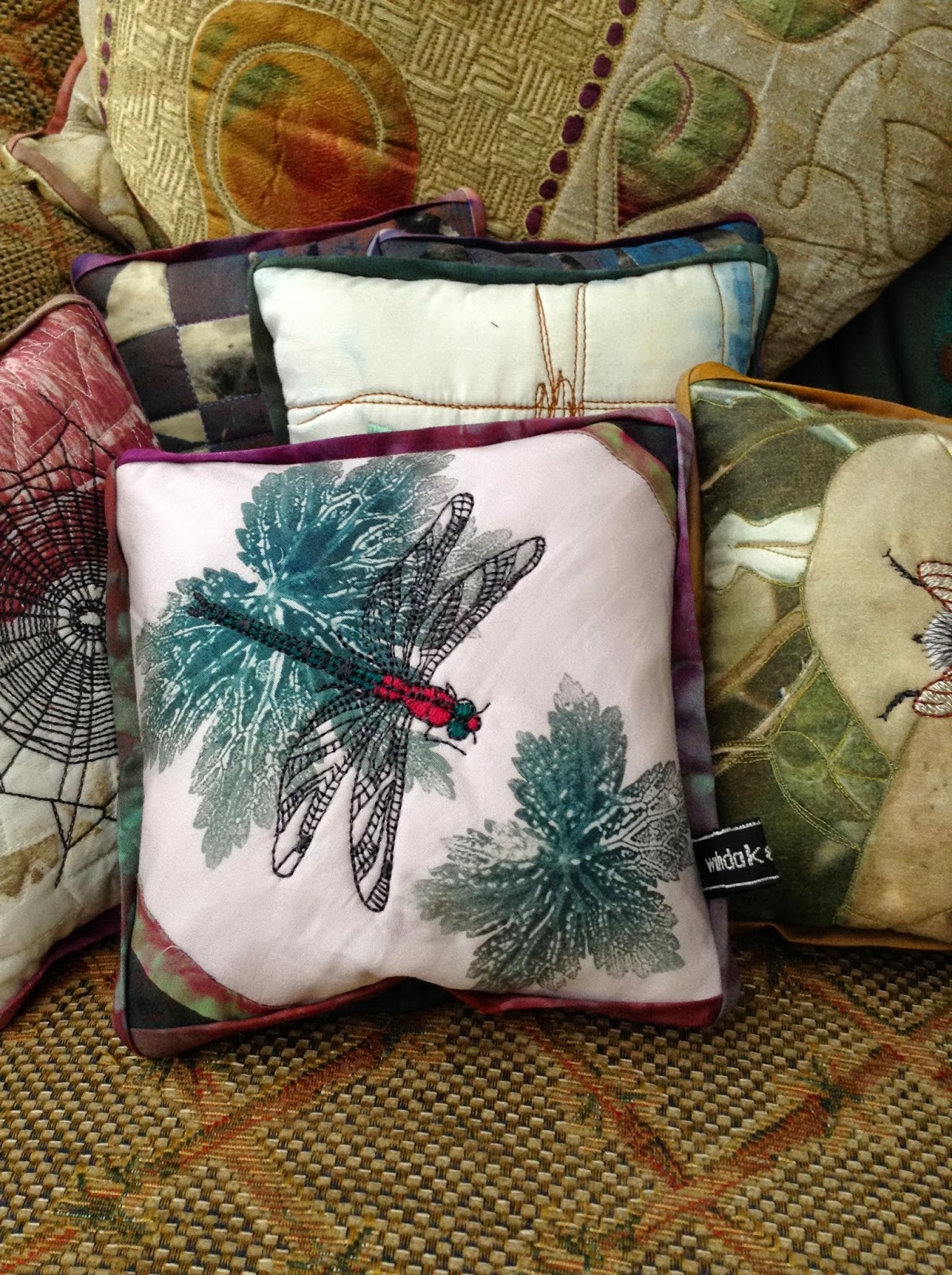 This one here at the front of the picture is a dragonfly embroidered onto a mono print I made a while ago. I confess I love this one! It's great fun working onto previously quilted, dyed and printed fabrics - I'm aiming to have masses of these for my display with no two the same! 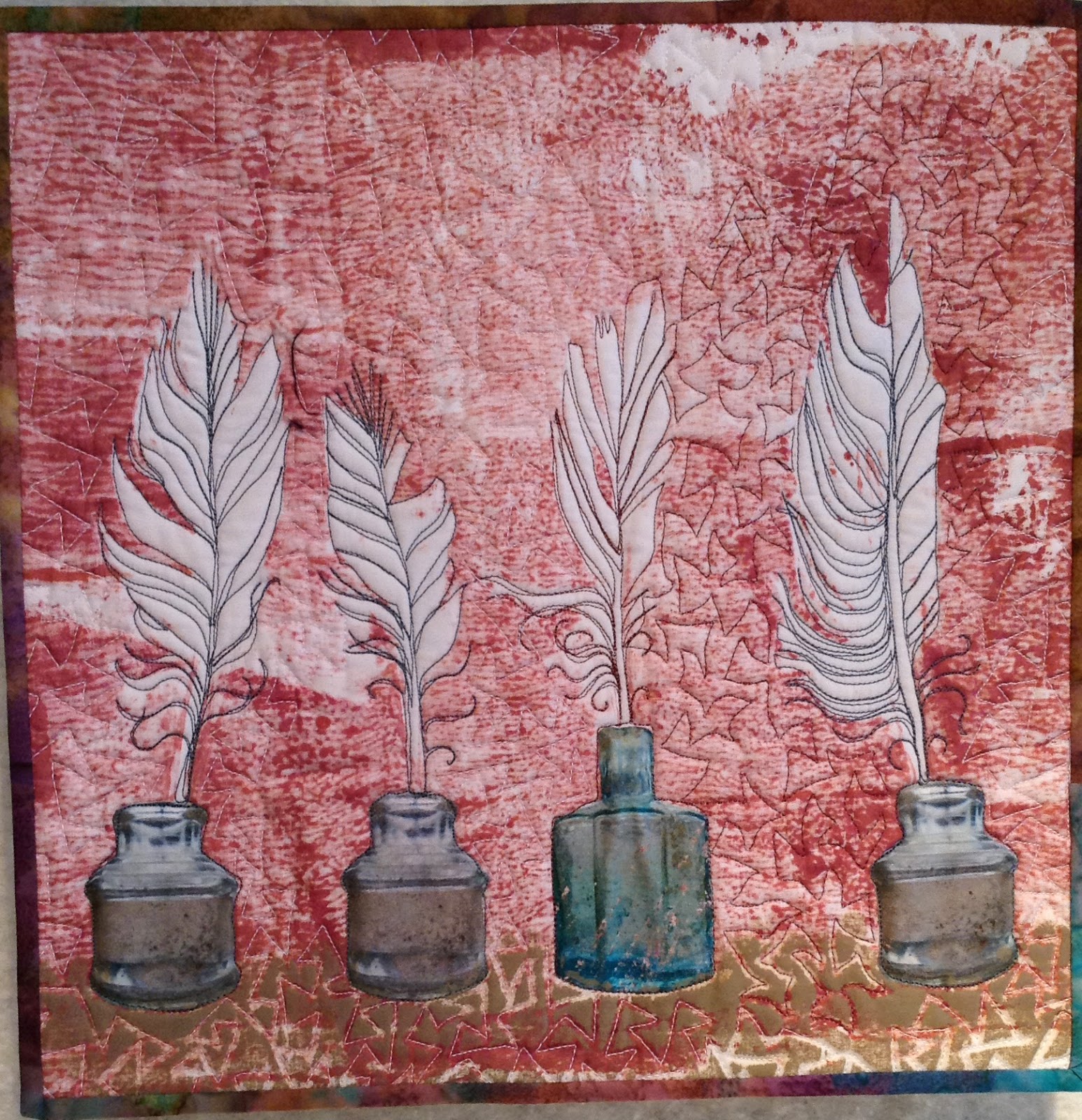 I've also added to the larger panels I'm going to display. This one is called Quill and is a mono print with photo image transfer. I've free motion quilted it and added a bit of  pastel in the foreground. 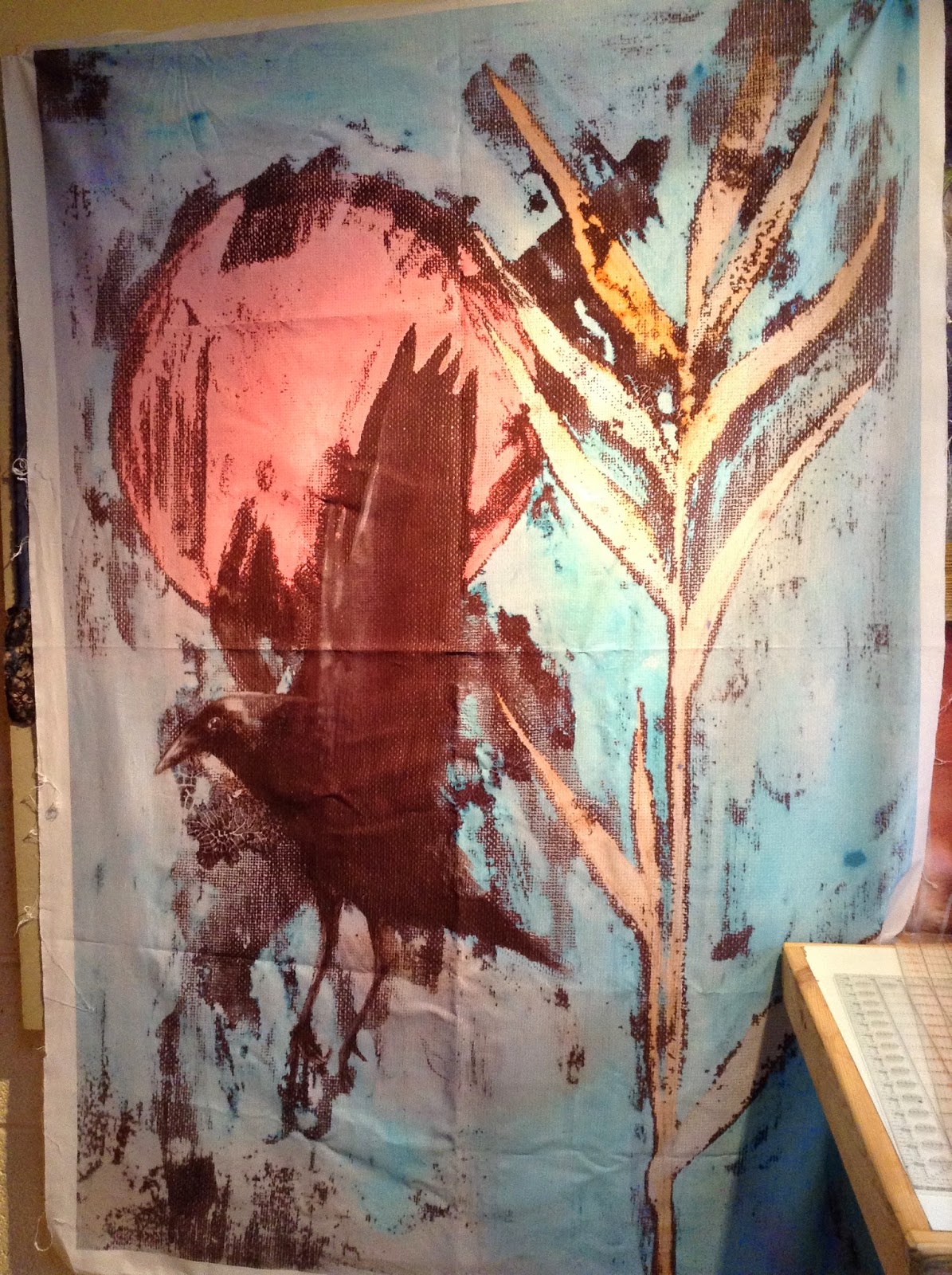 The excitement continues - my gouache and Indian ink crow is back from Jamie at the printers. I LOVE it and am  excited to start quilting. There is a bit of a queue for the long arm machine so I'll have to be patient but I'll let you see it as soon as progress is made!

Thanks for dropping by - Love Linda

It may seem like a long time till August but this year I'm determined to be better prepared for Festival of Quilts than I usually am. I've already started to make pincushions. These always sell well as they make nice gifts and don't take up much space in folks' suitcases! The embroidery machine has been purring away in the background while I free motion quilt a waterlily panel on the opposite side of the workroom. It's the most satisfying feeling - I can't tell you how much I love the sound of stereo sewing machines! 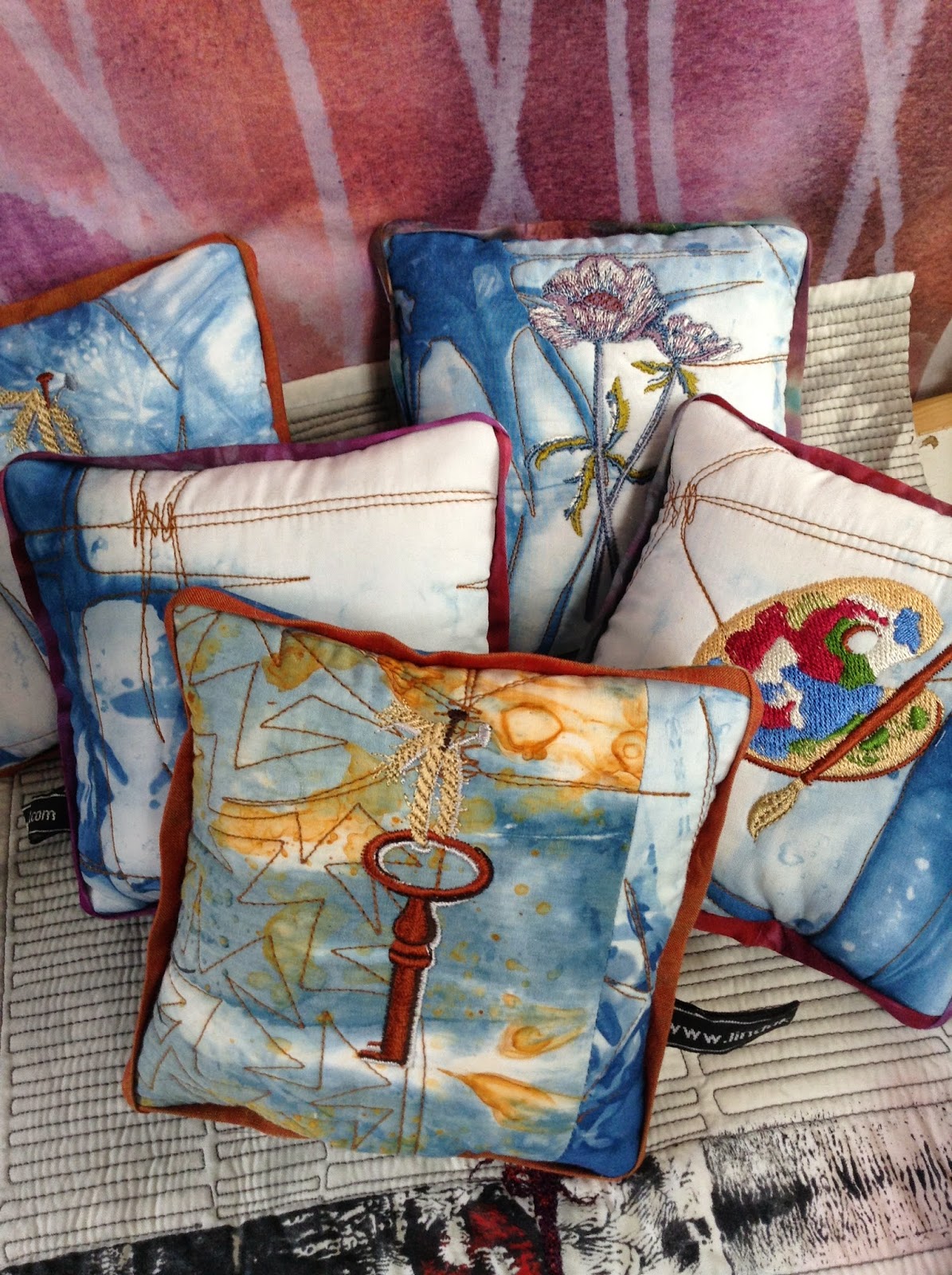 This first batch are worked on indigo dyed fabrics, some of which have also been rusted. They were free motion quilted for a previous incarnation but have now been up-cycled using Husqvarna digital embroidery designs. 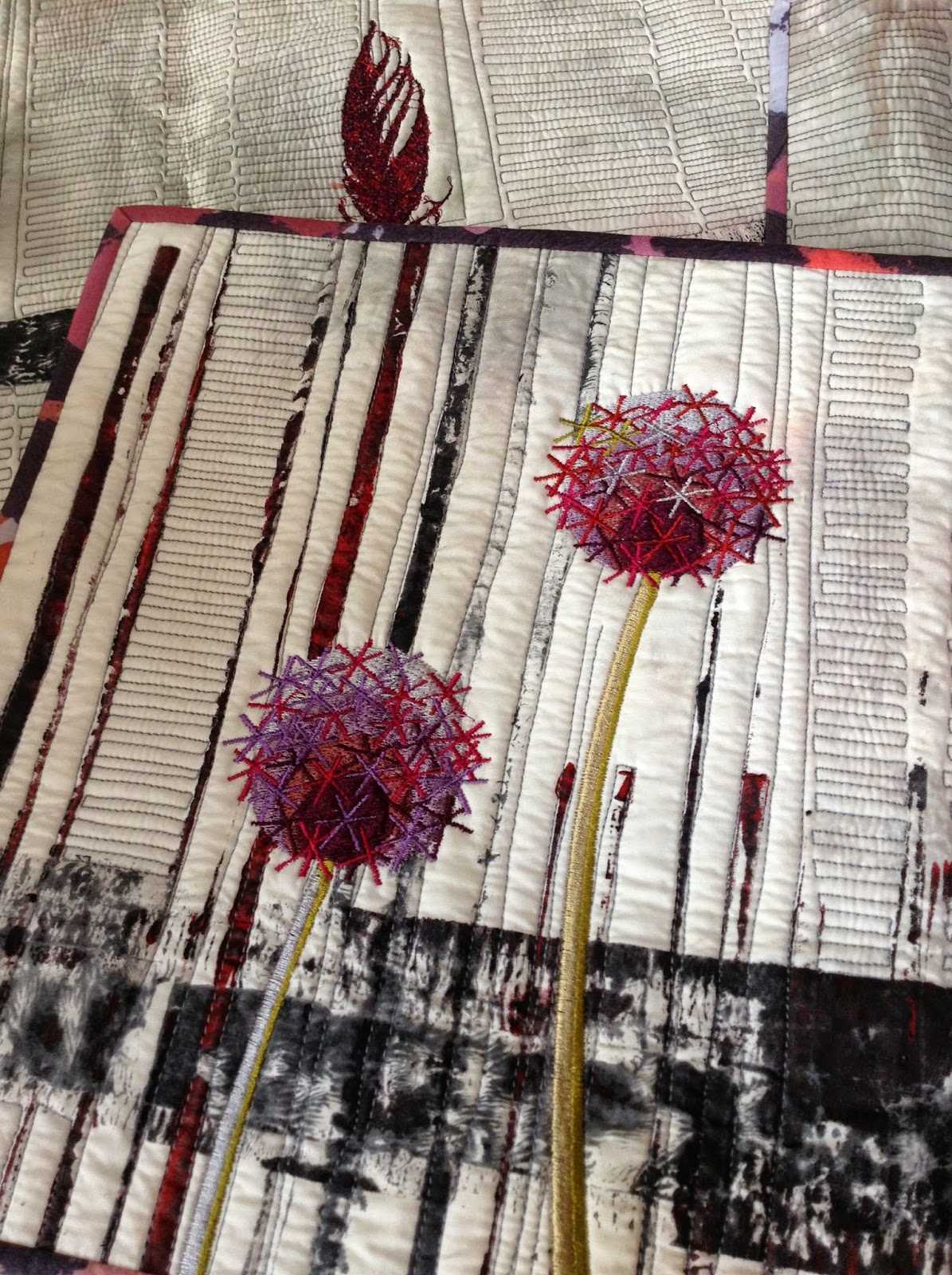 While I'm in the zone I've also been making more 12 inch panels to decorate the stand. Laura printed and quilted the fabrics and I've been adding embroidery with another Husqvarna design - I couldn't resist Alliums when the garden is full of the real thing right now. 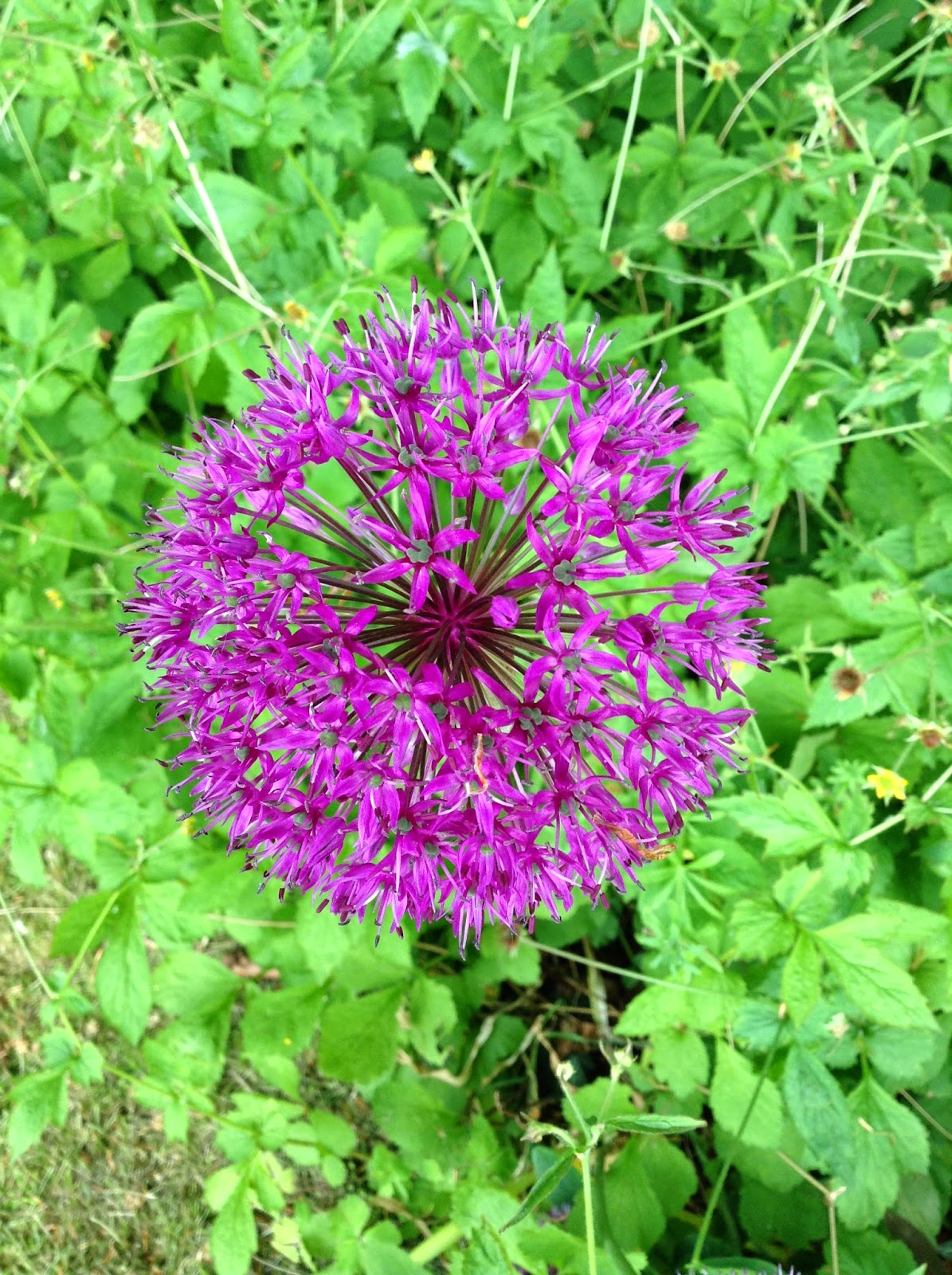 We've got white ones and yellow but the purple are definitely my favourites. 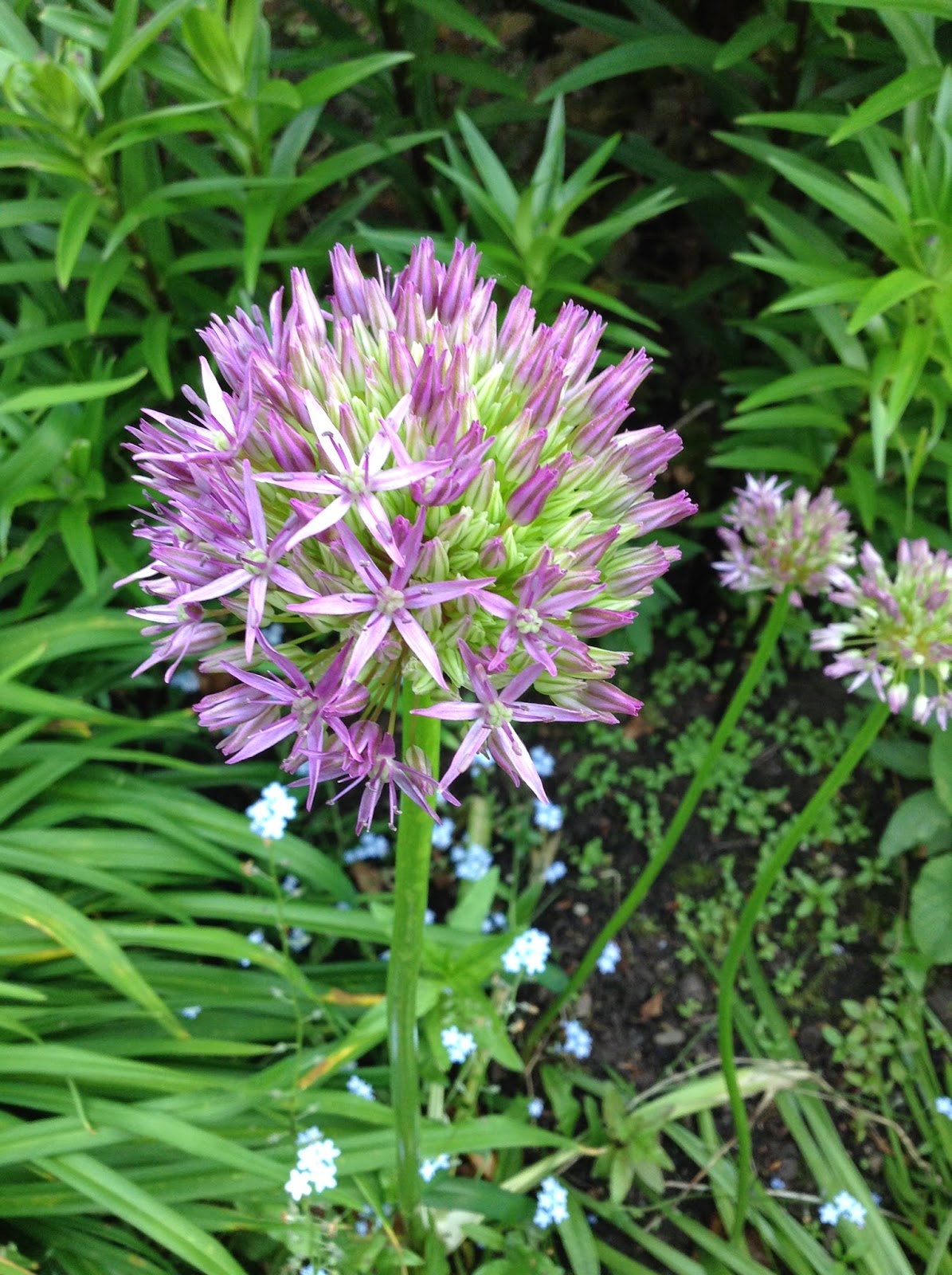 These are only just opening but they'll soon be magnificent, first as blooms and later as enormous seed heads that last for months. 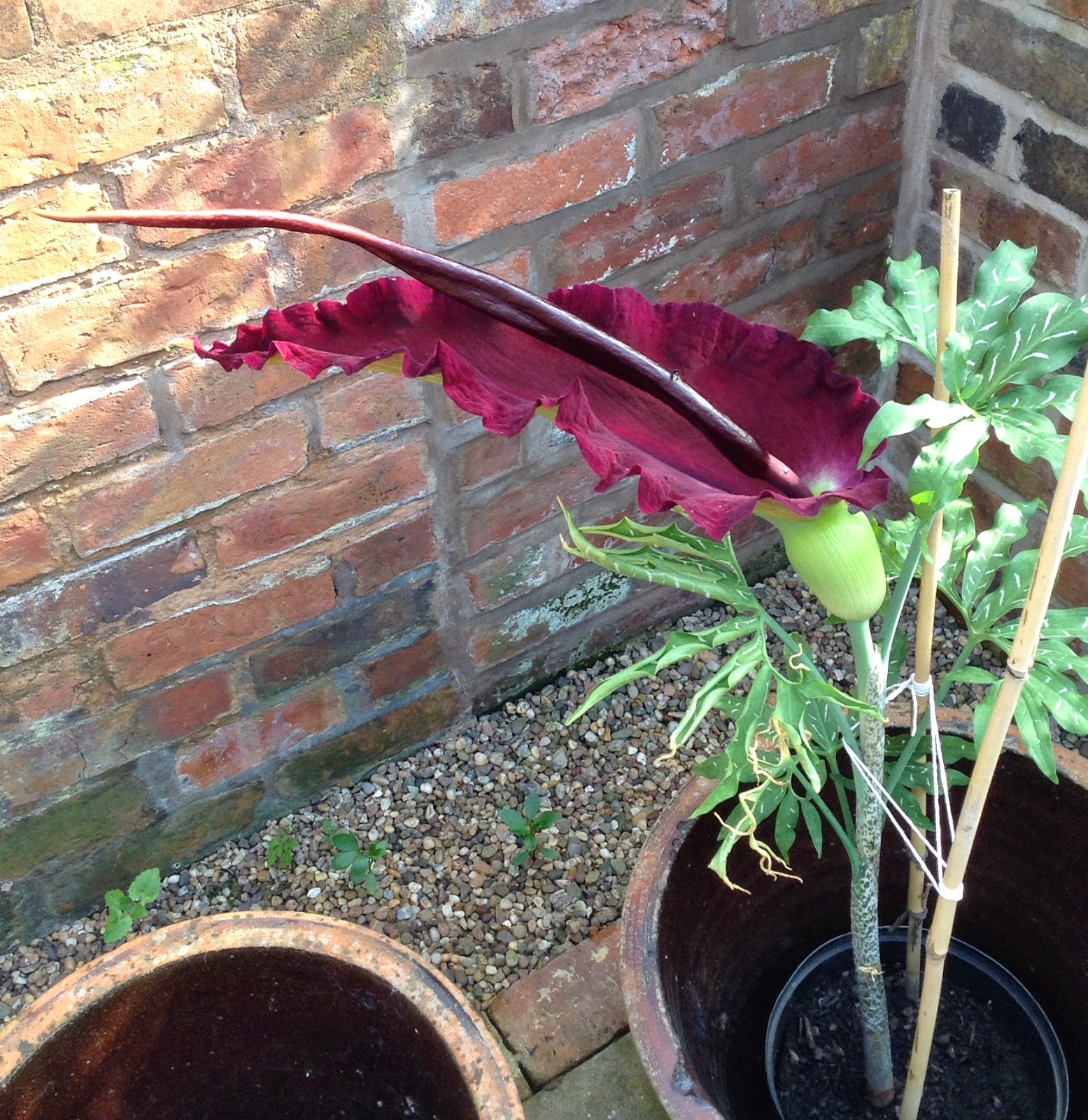 Just in case you think I'm going soft with all this flowery stuff - not all the flowers in our garden are so innocent looking! We're deciding where we can put this monster so the evil smell will not put us off our dinner. It attracts flies so nowhere near the house that's for sure! 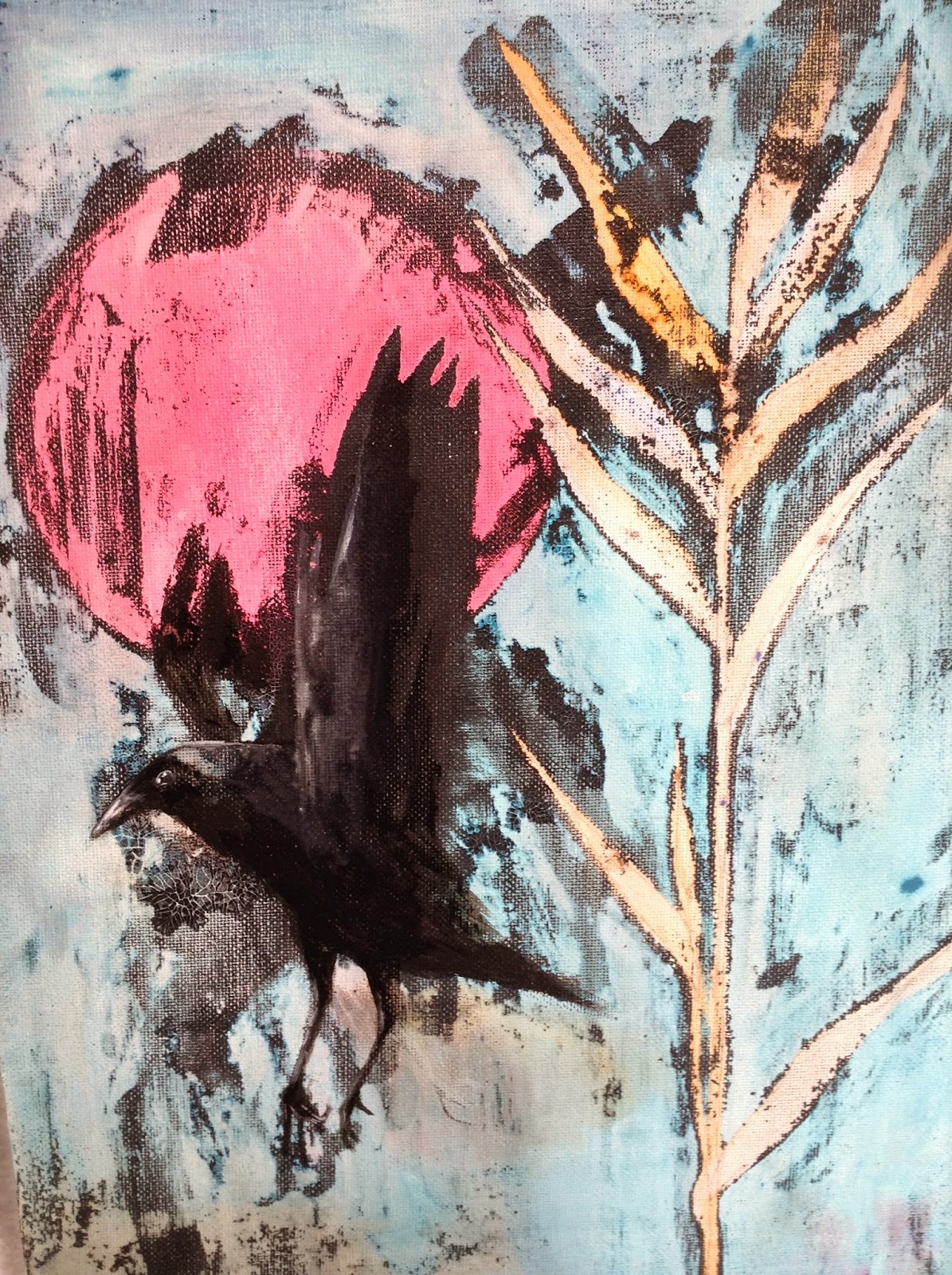 Can't remember if I've already let you see this but my latest crow painting is waiting to be scanned and digitally printed. I'm hoping Jamie can print it full width of the fabric for a bit of drama! 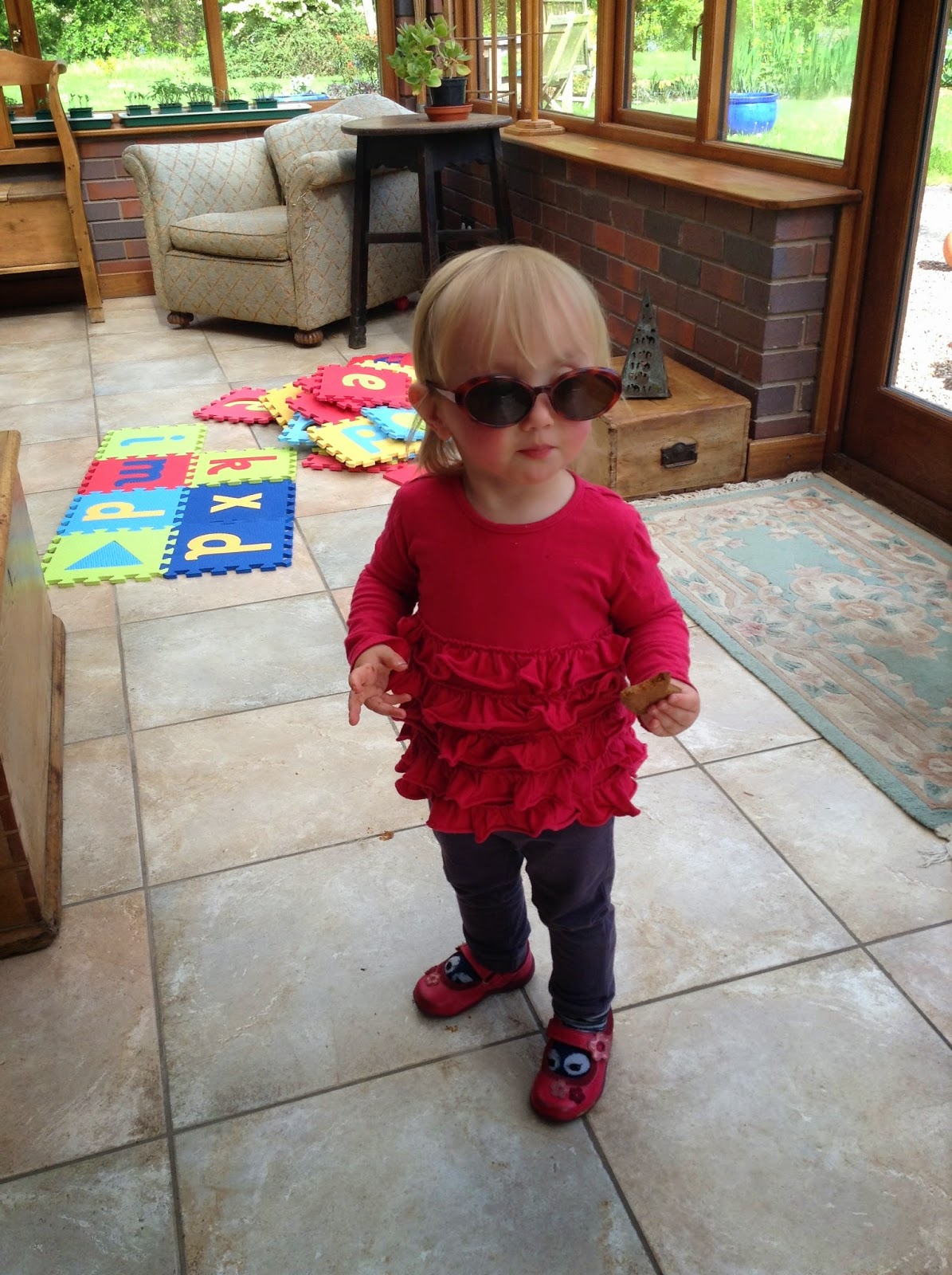 Finally, I've had complaints about the lack of Amelie photos lately. Maybe she's trying to avoid the paparazzi these days. Looking cool anyway!

Thanks for reading this. Talk to you again soon with more on preparations for Festival.
Posted by Linda Kemshall at 18:48 6 comments:

Multitasking with a vengeance

Today's post comes with a smugness alert! Not quite sure why I have so much energy right now but long may it last. This weekend is officially a holiday but rather than lounging about I've had a really productive day. I won't bore you with too many details (as most of them involved domestic stuff that has long been ignored -  we can at least now see out of the windows!!) but suffice to say I worked like a woman possessed and crossed off a long list of jobs.

Sunday is my day for baking so while the dough was doing its thing I planted out the dahlias that had overwintered in the greenhouse and started a watercolour portrait - as you do. While the first layers of paint were drying I supervised the bread and made biscuits. Then back to the drawing board, literally. 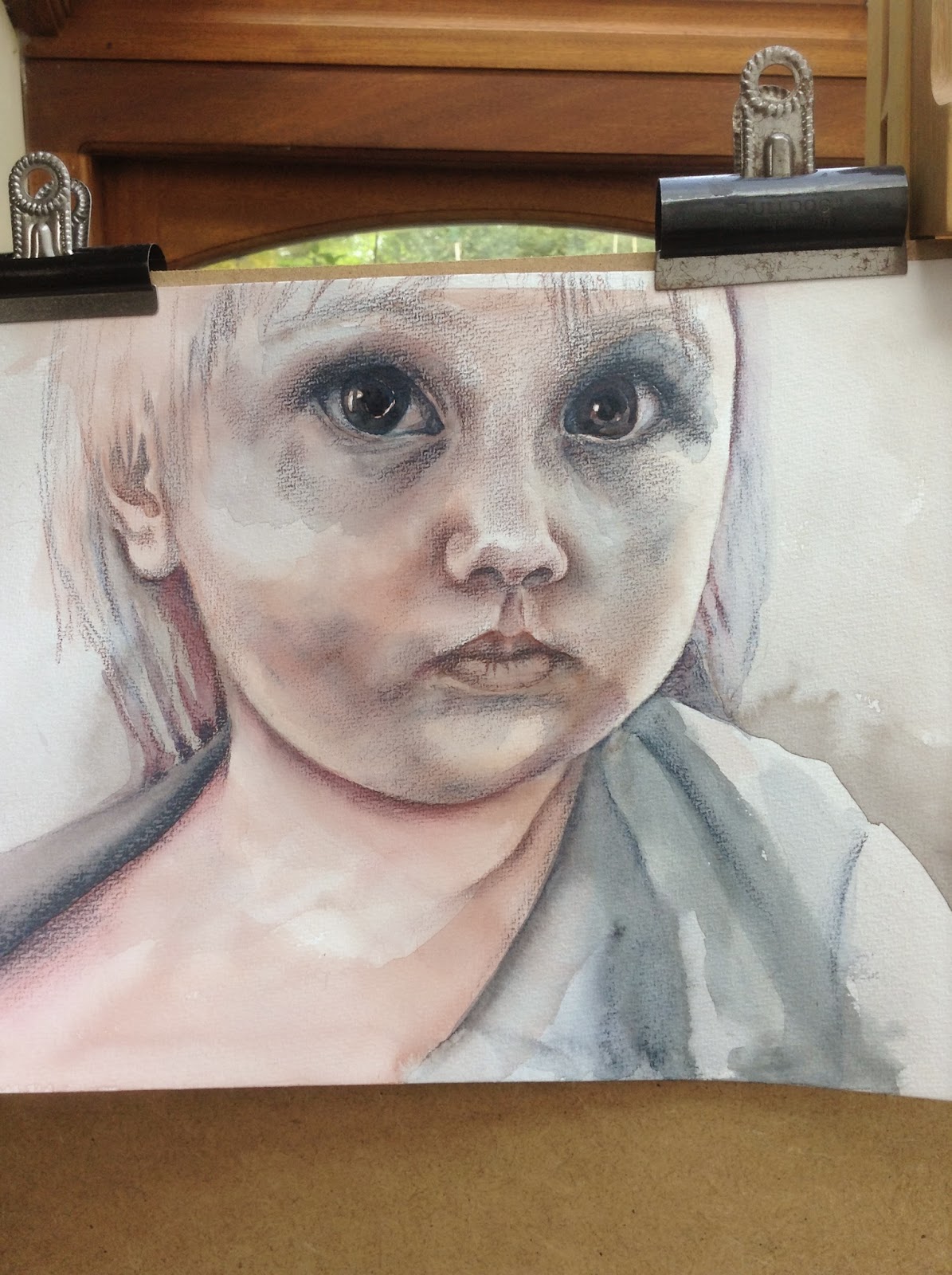 I can't believe this is the first time I've made an attempt to paint Amelie. I think children are the hardest subjects to paint so I've probably been too scared to have a go. I think it's a good idea to photograph your in progress drawings - for some reason it's easier to see the faults in a photo than when you look at the real thing. 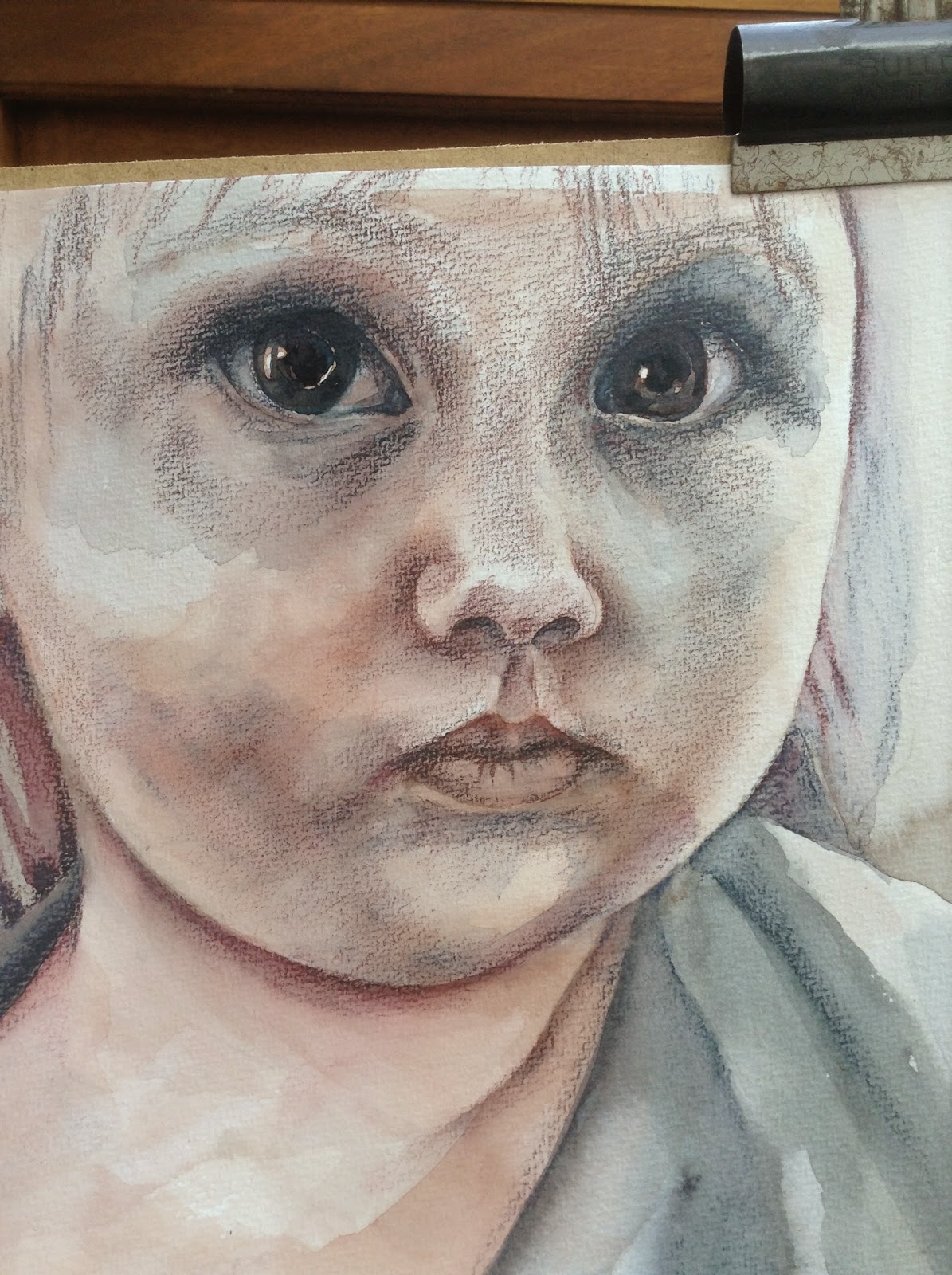 After the paint was dry I worked into it with Derwent Graphitint pencils. They are water soluble so you can wash over them with water for a more painterly effect. The dry pencil picks up on the tooth of the watercolour paper I've used making it look quite grainy. That's not such good news for a child's portrait because little children have such smooth skin but I rather like the effect in combination with the washes of transparent watercolour paint and I may leave it like that. I shall look at it again in the morning and hopefully know exactly what needs doing to finish it! 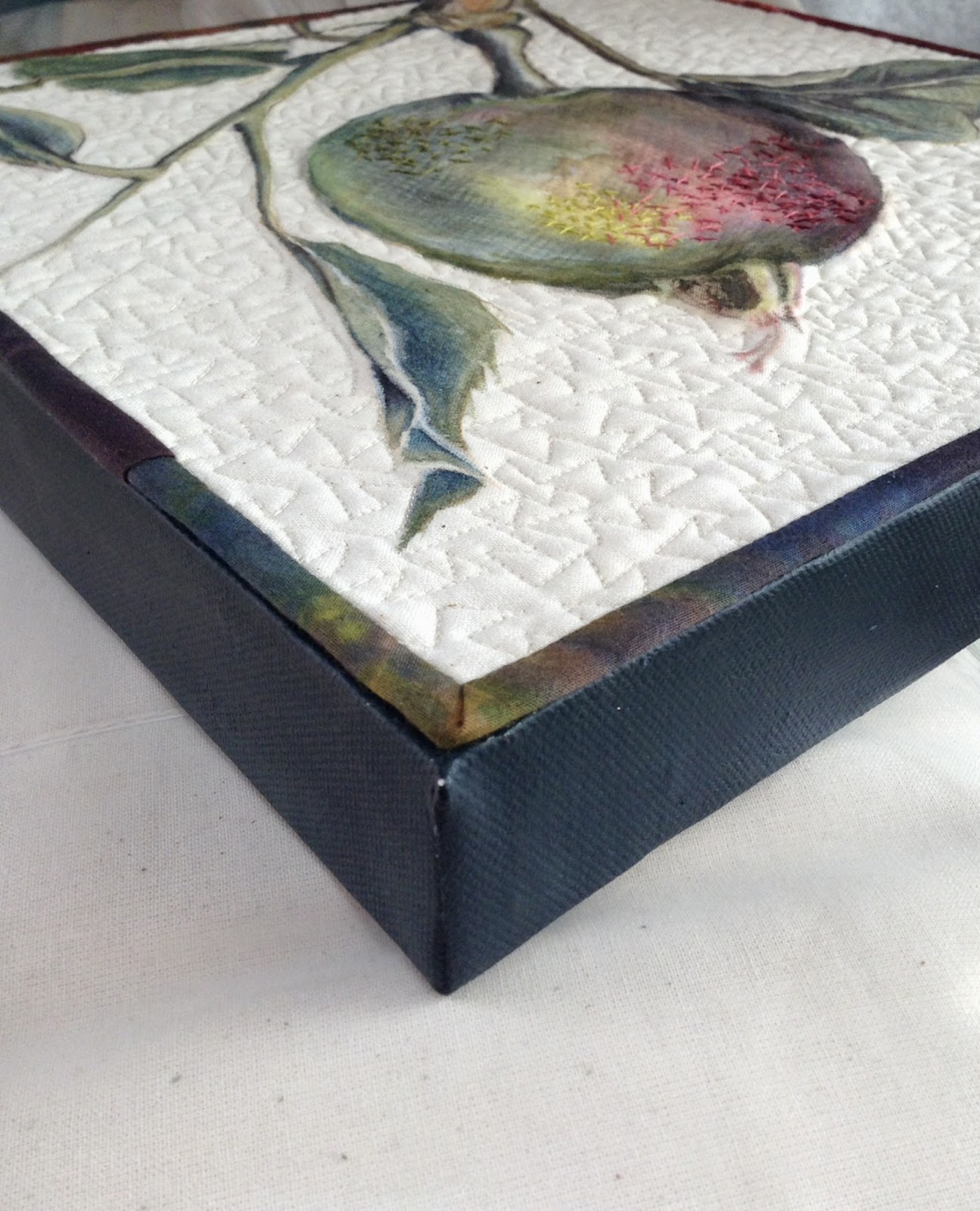 Since last week's DMTV video aired I've been asked how we attach quilted panels to a box canvas. Now I know we've covered this on DMTV before but not everyone has been a member since we began almost 5 years ago so here's the answer. If the piece is designed to cover the canvas right to the edge like the example above, it can't be sewn in place because the wood of the frame would be in the way of the stitching. In cases like this we almost always glue the panel in place.

We take a strong glue like this one and use just a narrow bead of it squeezed near to the top edge of the canvas panel. The quilt is placed on top and pressed in place. If you prefer to use a fixing method that is less permanent, you could attach velcro dots to the corners of the panel and stitch the complementary dots to the back of the quilt. This would allow you to remove the quilt if you wanted to but it's unlikely it would ever need washing - I just brush dust away with a clothes brush or, if necessary, vacuum the panel with the upholstery attachment. 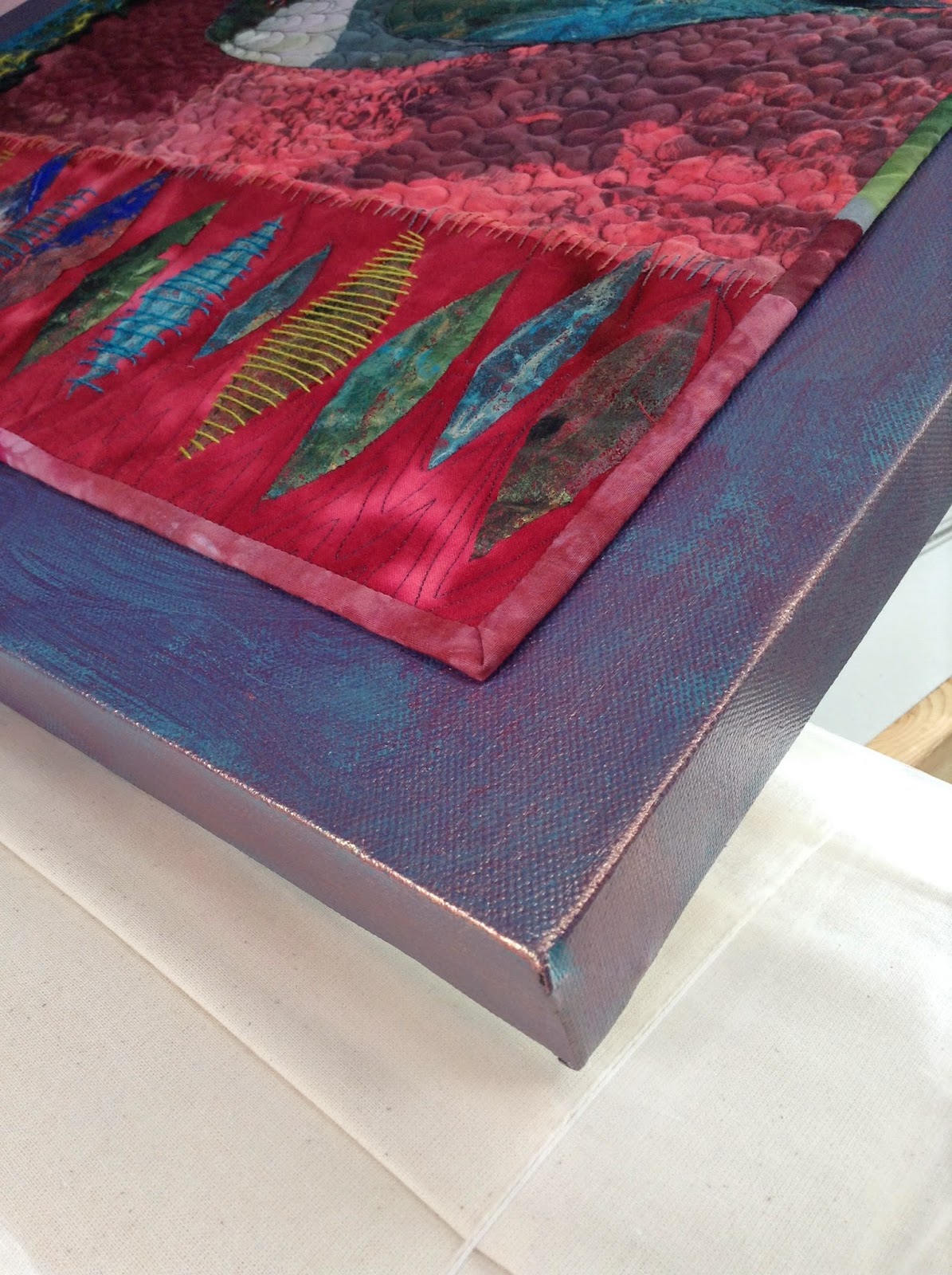 Now, if the quilted panel sits on the box canvas with a margin around it like the one above, it could be stitched in place although, once again, this particular example is glued in place. 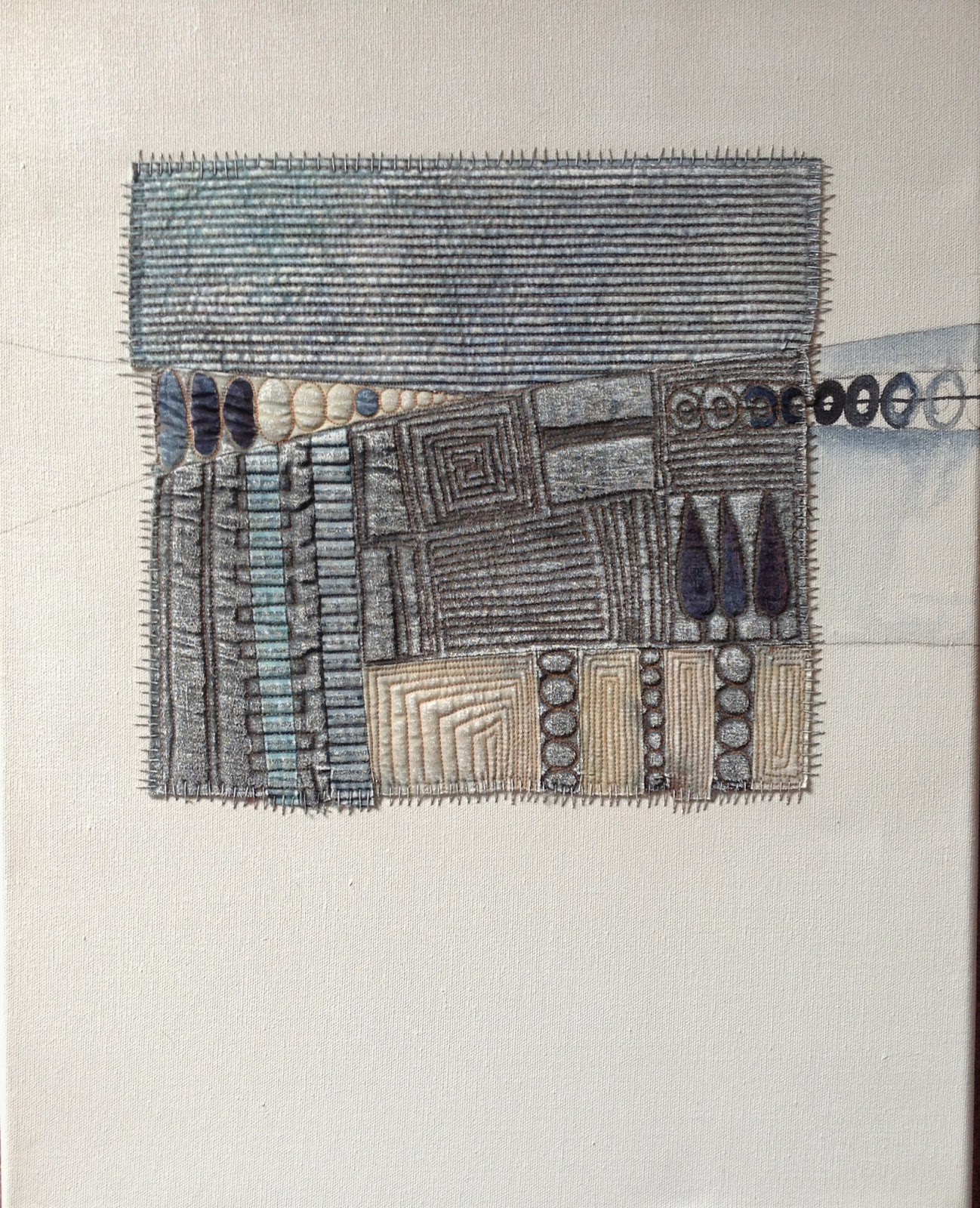 This very beautiful quilted panel of Laura's is indeed stitched to the box canvas. The stitching becomes an integral part of the design as well as being functional. 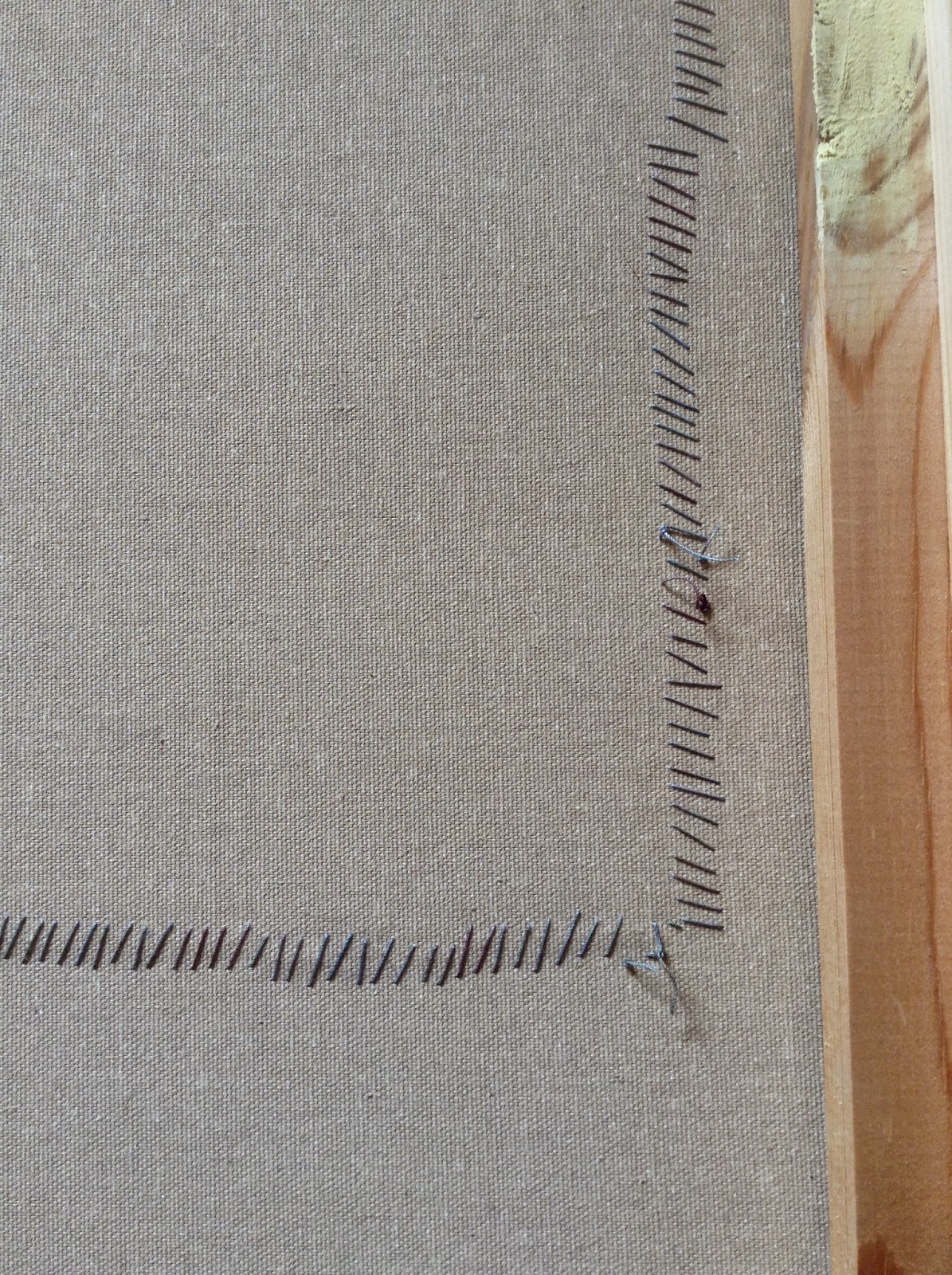 Here you can see the securing stitches on the back of the canvas.

I hope that answers the questions and is useful for anyone planning to mount work to a box canvas!

Many thanks for dropping by - I'll be back again soon - Linda

It's a bit late for a spring clean but that's what I'm about at present. I've accumulated so much work over the last couple of years that something has got to give. When Laura acquired her new studio last autumn I started sneaking things over there hoping she wouldn't notice. So far it's only made a small dent in the mountain. What's called for is a studio sale. If you take a look at the small works for sale page on this blog you'll see that I've added a few stitched panels to what's left of the bird paintings I listed recently. I'm only part way through the purge so more pieces will appear over the coming weeks. 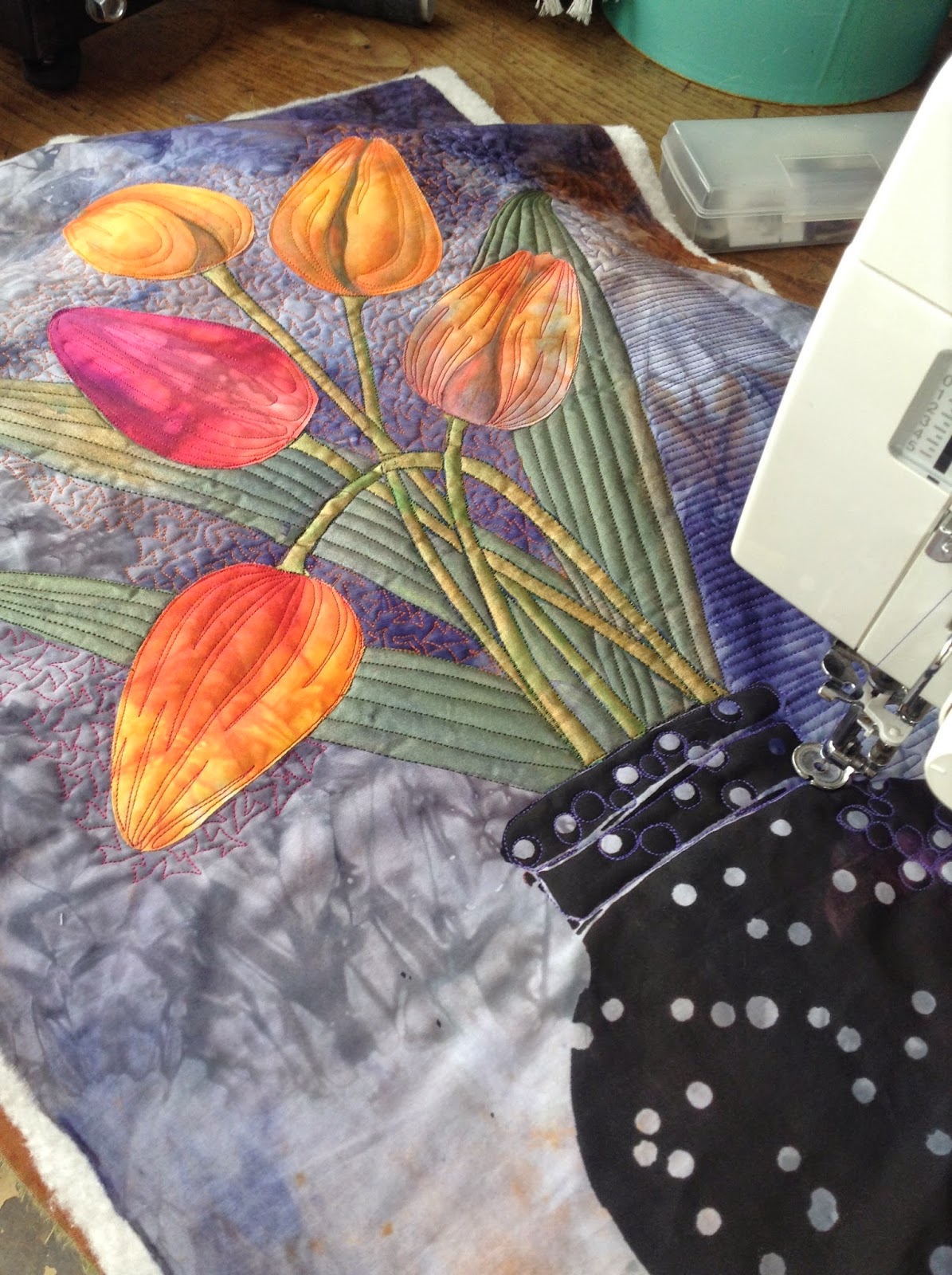 One of the great things about having a sort out is the stuff you find that you'd completely forgotten about! This applied, painted and printed tulip piece was lurking under a heap of unfinished tops. I rather like it! so today I made a start on the quilting. 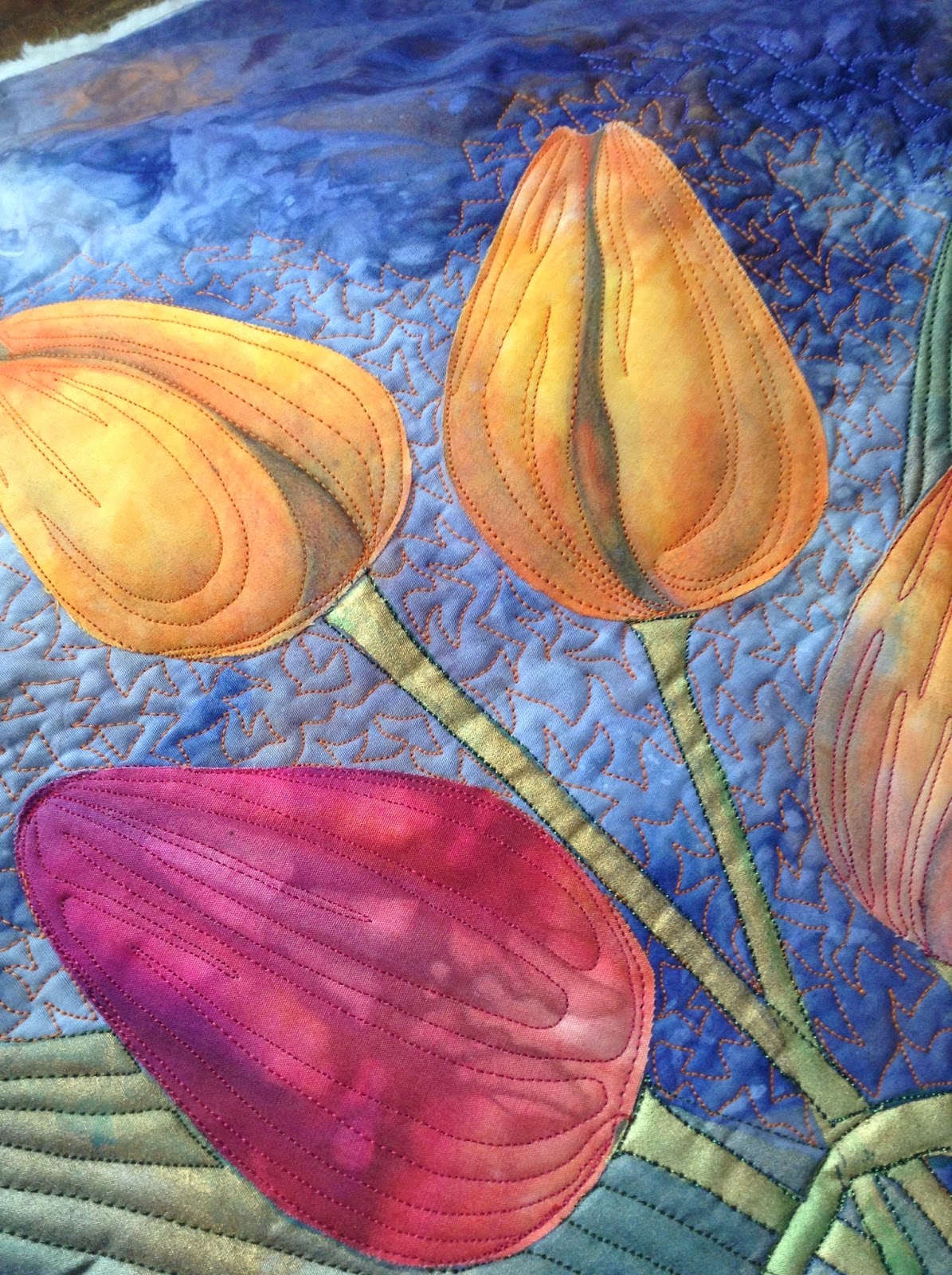 I have a reputation for always finishing whatever I start so perhaps I shouldn't confess how many UFOs I discovered. I shall try to tackle as many as I can over the summer - it's surprising how quickly they can be finished once you stop faffing about and just get on with it! We've booked our stand at Festival of Quilts so it will be nice to have some brand new work to display. Well brand new in the sense it's just been finished rather than any mention of how long ago it was started! 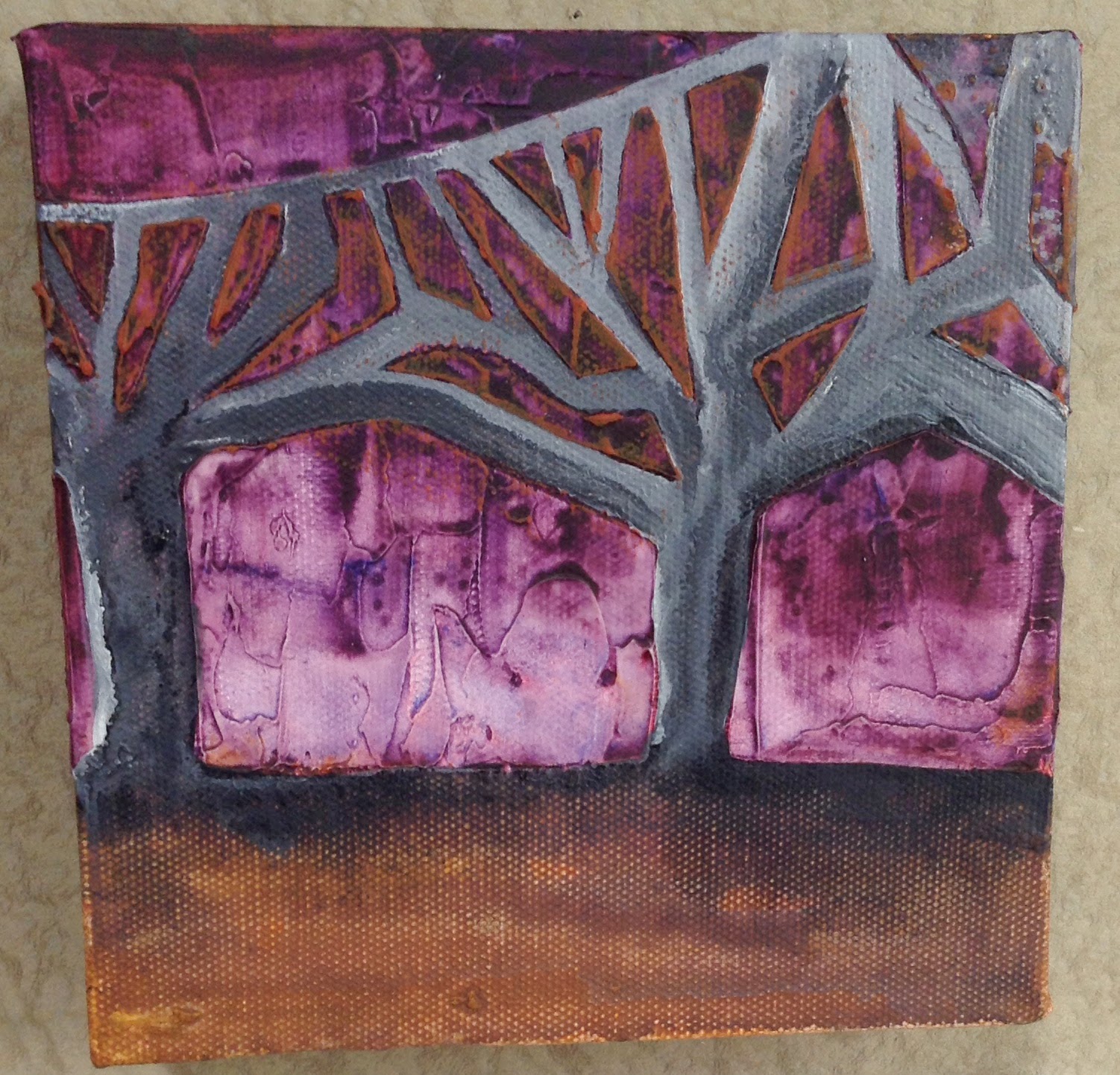 You wouldn't think I could 'lose' a painted panel would you but in fact I found two of them on my design wall under the layers of hand dyed and printed fabrics waiting for their moments of glory.  This one has only had its first wash of colour but I will be getting back to it soon!

I'll put this sudden rush of energy and good intention down to the longer daylight hours and the promise of summer just around the corner - hope you are all feeling the same!

Thanks for dropping by - Linda x